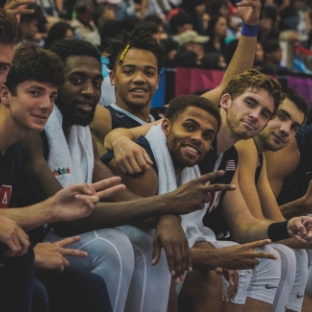 TAIPEI – One day after playing its closest game of the tournament, Purdue returned to its dominant ways with a 93-61 victory over a strong Serbia team Monday afternoon.

The win moves USA to the gold-medal game against Lithuania at 8 a.m. ET, on Tuesday. Lithuania defeated Latvia 73-71 in the other semifinal.

The Boilermakers, representing the United States in the World University Games, controlled the game from the outset, racking up their fourth win of 30 or more points during the tournament.

Led by senior Vincent Edwards, Purdue is on the brink of bringing the United States just its second gold medal in the World University Games since 2005.

While you slept, we worked.

“I thought our athleticism really bothered them and for whatever reason, we had a better recovery from our overtime game the previous night than they did,” head coach Matt Painter said. “We really just wanted to keep the pressure on and kind of wear them down. We did a good job of just competing and staying with it. We put ourselves in a great position and thought if we could come out in the second half and have that knockout punch, we could get them to concede the victory.

“Whoever we play in the gold-medal game, we are really going to have to compete and play hard. That is an excellent team we will face and will have to play at a high level to win,” Painter added.

Edwards was sensational against the Serbians, a team made up of mostly professionals playing in their top division. The Middletown, Ohio, native scored 31 points with five rebounds on 12-of-15 shooting from the field and 4-of-5 from long distance. In the first half alone, he scored 23 points to match Serbia’s first-half total as the Americans led 46-23 at intermission.

“Vince Edwards was just really efficient today and had a really good all-around game and got us going,” Painter said. “He has just been really good here in Taipei. He is such a versatile player that he puts other teams in a bind with the way he can play. Your senior year is supposed to be your best year of basketball and it’s trending that way for him. He’s played great here and has done a lot of things to help our team win.”

Serbia was within shouting distance at 60-36, when the Americans embarked on a backbreaking 19-0 run to end the third quarter with a 79-36 cushion.

Purdue is on medal watch! @BoilerBall will play in the gold medal game tomorrow at 8 p.m. (8 a.m. ET). #USATeam pic.twitter.com/xlm6OC5lrC

Stay tuned for coverage from the CBS Sports Network regarding Tuesday’s gold-medal game.