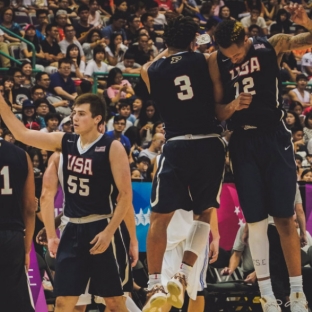 The win moves the Americans’ record to 3-0 in pool play and inched the squad closer to the medal round after posting wins over Argentina (89-76), United Arab Emirates (127-53) and Czech Republic (107-78). Argentina and Estonia are both 2-1 in pool play while the Czech Republic and Romania are 1-2.

USA regrouped and took an 82-64 lead into the fourth quarter, before outscoring the Czech Republic 25-14 in the final stanza for a 107-78 decision.

Highlights. Lots of them. pic.twitter.com/klB3NXl7mp

The American squad is now shooting 52.4 percent from the field in three tournament games, while leading the field in scoring at 107.7 points per game.

Vincent Edwards had an outstanding game for the USA squad, adding five rebounds and three assists to go along with his game-high 22 points. Edwards was 8-of-12 from the field and 2-of-4 from long distance.

USA will go for the pool C title on Thursday, facing Romania at 3 a.m. ET, from Taipei Arena.