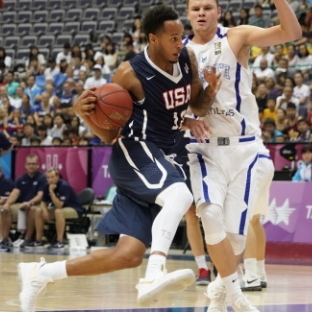 TAIPEI — The USA scored over 100 points for the fourth straight game and ended pool play with a 5-0 record after a 101-61 victory over Estonia at Taipei Arena on Friday.

The win was the Americans’ fourth straight victory of 25 points or more after an opening-game 13-point decision over Argentina. Over its last four games, the USA has averaged 113.8 points per contest, winning by an average of 50.3 points per game.

The story of the tournament continues to be Purdue’s shooting. Representing the USA in the World University Games, the Americans have shot 169-of-306 (.552) from the field and 58-of-123 (.472) from 3-point range over the last four games. Purdue is leading the field in scoring at 108.8 points per game.

Vincent Edwards continued his sensational play in Taipei with 19 points, 11 rebounds, three steals and two assists. Carsen Edwards was 6-of-7 from the field for 16 points and Jacquil Taylor had seven points, 14 rebounds and two blocked shots off the bench. Ryan Cline led the team with seven assists to go along with nine points on three trifectas.

All 12 USA players had at least three points and six players had between seven and nine points.

Purdue now begins its quest for a World University Games gold medal, facing off against Pool D’s No. 2-seeded team in Sunday’s quarterfinals beginning at 3 a.m. ET, from the Heping Elementary School in Taipei. The likely opponent will be the winner of the Ukraine / Israel contest this afternoon.

It gets real now. #BoilerUp pic.twitter.com/JvzSF3N3wA