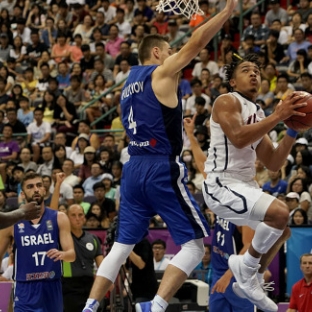 TAIPEI — USA rallied from an eight-point third-quarter deficit, then outscored Israel 14-10 in overtime to advance to the World University Games semifinals with a 111-107 victory in front of a packed crowd at Taipei Arena on Sunday.

The win moves Purdue, representing the USA in the World University Games, to Monday’s semifinal contest against Serbia, which was an 85-84 double-overtime winner over Finland in Sunday’s quarterfinals.

“I thought this was an unbelievable back-and-forth game. Obviously, Carsen was really hot and really gave us a boost of confidence,” head coach Matt Painter said. “Israel is a great passing team, have really good guards and athletic big men and they did a great job attacking us. It was just a really tough matchup on both sides. We were just able to grind it out and our guys showed a lot of grit by getting defensive stops and making some free throws at the end.”

The story of the game was Purdue’s 3-point shooting, spearheaded by sophomore Carsen Edwards. The USA made 20-of-41 3-pointers, including eight by Edwards and five by senior P.J. Thompson.

Edwards was especially hot, making 8-of-14 from behind the arc, scoring 18 of his 36 points during a pivotal third quarter.

“I just felt I needed to be more aggressive after the first half,” Edwards said. “I chose my spots and fortunately the guys got the ball in places that I could score. It was a great team effort today.”

The Americans trailed after one quarter 23-19 and at halftime 49-45. Israel scored the first four points of the second half to take a 53-45 advantage, before an 11-0 American run turned the tide. Israel countered with a 6-0 spurt for a 59-56 cushion, but the Americans would outscore Israel 15-7 the rest of the way to lead 71-66 after three quarters.

The USA still led 97-94 with just over three seconds to play, when Israel made one free throw, intentionally missed the second, but received a fortuitous bounce on a rebound to tie the game at 97 with 0.9 seconds left and send the game into overtime.

Thanks to @NCAA president Mark Emmert for visiting us after today’s game. Great to have you here. #BoilerUp pic.twitter.com/WSc59cOApO

Israel scored first in the extra session and was still tied at 104, when Dakota Mathias connected on his fourth triple of the game with 22 seconds left and one on the shot clock for a 107-104 advantage. Mathias would hit two more free throws for a 109-104 cushion and Thompson’s free throw with 1.9 seconds left iced the game away for the Boilermakers 111-107.

Carsen Edwards had 36 points on 11-of-22 from the field, adding four rebounds, two assists, two steals and a key blocked shot late in the game with Purdue owning a 107-104 lead.

Vincent Edwards, who rolled his ankle late in the second quarter, was sensational against Israel. The 6-foot, 8-inch senior forward scored 21 points with nine rebounds, six assists against no turnovers, two steals and one blocked shot in 39 minutes.

USA and Serbia will tip at 12:30 a.m. ET, on Monday for a spot in Tuesday’s championship game.