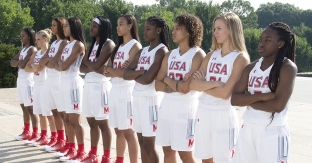 TAIPEI, Taiwan — The United States dominated both ends of the floor from the tip as it beat Poland, 102-53, in World University Games pool play Tuesday afternoon at the Heping Basketball Gymnasium.

The Maryland women’s basketball team, which was selected to represent the U.S., stifled Poland’s offense throughout the game. Offensively, all 11 Americans scored, led by sophomore Blair Watson with 19 points and 10 boards and Michigan State alum Tori Jankoska with 19 points as well.

“I thought our defense today was really effective,” head coach Brenda Frese said. “We shared the basketball really well with 23 assists and we shot the ball well with 10 threes. These games have been huge for us in our growth as a team.”

The USA and Poland traded the first two buckets, then the U.S. went on a spurt to jump out to a 28-8 lead, thanks to a bucket by Watson with 2:23 left in the quarter.

The USA will take on the Czech Republic at 8:00 a.m. ET on Aug. 23 to finish out pool play. The quarterfinals and semifinals will be Aug. 25 and 26, then the medal round games will be played Aug. 28.

Live stats are available for all games at www.2017.taipei and live coverage will be on the team’s Twitter at @umdwbb. Should the U.S. advance, live streaming will be available for later rounds.

Share. Twitter Facebook Google+ Pinterest LinkedIn Tumblr Email
Previous ArticleCollege football rankings: Who has been No. 1 in the AP preseason poll most often and how did they finish?
Next Article World University Games: Iowa baseball (USA Team) run-rules Russia, moves to 2-0 in pool play