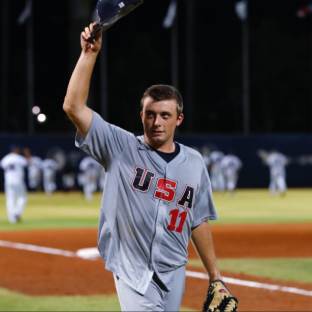 TAIPEI, Taiwan — Junior starting pitcher Cole McDonald tossed a no-hitter to lead USA Team to an 8-0 victory over the Czech Republic on Friday night in a Super Round game at Tianmu Stadium. Iowa baseball hasn’t had a nine-inning no-hitter since 1965.

McDonald, a New Hampton, Iowa, native, faced two batters over the minimum and he needed just 97 pitches to complete the gem. The right-hander walked two batters in the first before retiring 11 straight batters from the first to the fifth inning.

Following a sixth inning USA error, McDonald sat down 10 straight before issuing a one-out walk in the ninth. He got Arnost Dubovy to hit into a game-ending 6-4-3 double play to close it out.  McDonald had seven strikeouts.

USA’s offense spotted McDonald with early run support with a six-run first inning. Senior Tyler Cropley had a two-run double in the inning and USA was the beneficiary of three Czech errors.

When did you know Cole was on?

“It was early. After the first inning he had a couple of walks and worked out of it. He was pounding the zone, he was at the knees all night long and his breaking ball and change-up were good. He kept them off stride all night. He got a lot of ground balls and our defense was good behind him. It was exactly what we needed.”

“Cole went out and grew a lot. That’s what we needed with playing Korea tomorrow. We’ll be able to mix-and-match; we didn’t have to use anyone out of the bullpen and we will still have everybody fresh for the medal round games starting Monday. It was a tremendous, amazing performance by Cole and it was a great atmosphere and crowd.”

“It’s a surreal feeling. I knew it was going the whole time, I just tried to stay even-keeled and not make it a big deal and keep on making pitches. I got lucky on a few pitches, but that happens when you throw one.”

On going out for the ninth

“I wasn’t nervous, I was just trying to stay positive. Before I went out there, I was like “I need to make the three outs. They aren’t going to touch me, they haven’t been all game.” I didn’t want to change anything I did the previous eight innings.”

On what made him effective

“All my pitches were working. I had run on my fastball, my slider was breaking like it has been all summer, and I threw a change-up when I had to on a few pitches.”

The Czechs had four errors in the game; three USA runs were unearned.

It’s been that kind of game so far in Taipei. 🙂 #USATeam #Hawkeyes pic.twitter.com/gP5WansAc8

2. Seven of USA’s nine starters had at least one hit in the game and eight different players scored runs.

USA will square off against Korea on Friday at 10 p.m. (CT) at Tianmu Stadium.  The Koreans, the second seed in Pool A, fell to Group B’s top-seeded Japan, 2-1, on Friday morning.

Following the game against Korea, the brackets will be seeded one through four for the semifinal rounds.