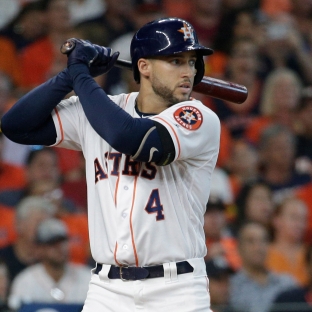 Jordan famously wore his North Carolina shorts underneath his Chicago Bulls shorts. Game 1 of the World Series is Tuesday night, when the Los Angeles Dodgers host the Astros, and Springer will wear custom-made cleats that have the UConn Husky logo on the insoles of his cleats.

RELATED: Where did Astros and Dodgers players go to college?

Springer is one of 39 former NCAA student-athletes to appear on the 40-man rosters of the two World Series participants. Springer was born in New Britain, Connecticut, before attending UConn, where he was named the 2011 Big East Player of the Year before being drafted 11th overall in the 2011 MLB Draft.

Take a look at Springer’s cleats below.

George’s cleats are all set for Game 1 of #WorldSeries!

Springer will lead things off tonight against Kershaw on FOX at 8! #UConnNation pic.twitter.com/6XxOPPiSxP