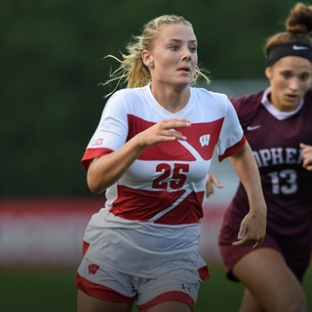 MADISON, Wis. – The Badgers have believed in themselves all season.

The Wisconsin women’s soccer team believed against No. 3 Virginia at the beginning of the season when they won 1-0 and the Badgers believed at the end of season against No. 11 Penn State, earning a 1-0 shutout over the Nittany Lions on Wednesday night to close out the regular season.

Oh, what a night! pic.twitter.com/TSsFguUFhm

The first and only strike of the game came off a Penn State (10-4-3 overall, 6-2-3 Big Ten) foul where the Badgers’ (12-4-2, 6-3-2) Sammy Kleedtke was awarded a free kick opportunity. She sent a beautiful, high-arching ball to the middle of the box where Cameron Murtha finished it to the bottom corner off a header. It was Murtha’s fifth goal of the season and third goal in conference play. The pass marked Kleedtke’s second assist of the year.

Despite the low-scoring affair, Wisconsin dominated the parts of the pitch that culminated into a noticeable differential between the two. The Badgers impressively led Penn State, 10-6, in shots and 6-2 in shots on goal.

And so it begins! The #Badgers will play at Minnesota on Sunday! pic.twitter.com/Hqb6JJoCad

It is Wisconsin’s second win over a top-15 team this year, beating then-No. 3 Virginia and No. 11 Penn State.

Wisconsin now turns its gaze to the postseason, and more specifically, the Big Ten Tournament. Tournament play will start on Sunday afternoon and the Badgers are the No. 6 seed. The official bracket will be released on Thursday.