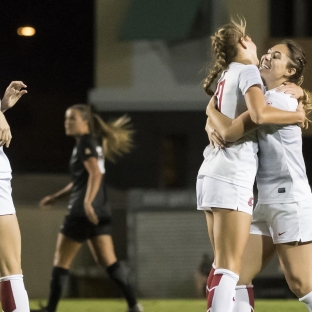 ORLANDO, Fla. – In one of the gutsiest defensive performances in Washington State history, the Cougs (10-7-3) took down the No. 8 and two-seeded Central Florida Knights (13-2-3), 1-0, Saturday night in the first round of NCAA Championships.

The Cougs advanced thanks to the efforts of keeper Ella Dederick and her defensive mates as WSU handed the Knights just their second loss of the season while picking up the Cougs’ 11th shutout of the year. Standing on her head throughout the night, Dederick came up with six crucial saves while the backline added three more stops on the line. On the other end, it was the Knights vaunted defense that suffered a fatal blow when an intended clearance on a Cougar cross was inadvertently headed into the home net in just the fifth minute of play.

26′ | Hancock clears one off the line to save the lead for the Cougs | 1-0 WSU #GoCougs pic.twitter.com/UMgf4uouzI

Coach’s Quote Of The Match

“We did what we had to do and then it was a little bit like the UCLA game.We had to fight for everything in the second half and we did. The good thing is in the conference we’re in everyday this is what we see everyday. We’re used to that. We’re battle-tested. We’re so excited. Everyone counted us out flying us from Pullman to Orlando. And here go the Cougs. We’re excited. Back to business and on to the next round.”

Things You Need To Know