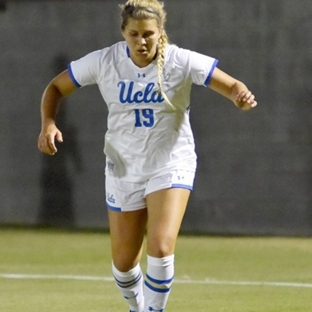 The No. 5 UCLA women’s soccer team came from behind twice in regulation and then wasted no time in overtime to defeat No. 6 USC, 3-2, on a golden goal by freshman Ashley Sanchez 80 seconds into extra time. The game was played at UCLA’s Drake Stadium in front of a NCAA women’s soccer regular season record crowd of 11,925 fans.

Sanchez’s game-winner at 91:20 was perfectly set up by Sunny Dunphy and Anika Rodriguez. Dunphy sent a through ball to Rodriguez, who laid a pass off to Sanchez. The freshman’s shot deflected off a USC defender into the back of the net for the game-winner.

“This team is super-resilient,” said UCLA head coach Amanda Cromwell. “We know we can score goals. I don’t think we ever really lose our confidence when we put ourselves into a hole.”

USC drew first blood in the crosstown showdown, scoring in the 11th minute on a header by Nicole Molen. UCLA tied it up at 25:00 on center back Kaiya McCullough’s first career goal. Molen scored again in the 34th minute to give USC a 2-1 advantage, which the Trojans held until the 65th minute when Rodriguez stole a pass in the back third and beat the USC goalkeeper for the equalizer.