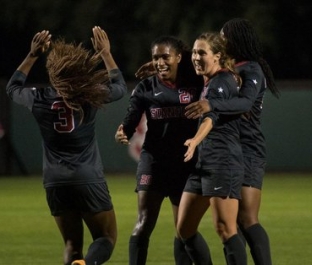 We’ve come to a point in the season when conference standings are taking final form and the focus is shifting toward postseason play. Stanford in the top spot with UCLA, South Carolina, Duke and North Carolina making up the rest of the top five. On Thursday night, Duke defeated ACC rival Boston College 2-1 with possibly the finest goal of the evening courtesy of senior Schuyler DeBree .

DeBree’s shot doesn’t need much more of an explanation, just see for yourself:

As you continue to replay DeBree’s goal over and over again, let’s dive into the three biggest matchups to watch this weekend.

Hello, Nittany Lions. Penn State shot up four spots to No. 9 in the coaches poll this week and is undefeated in its last four games, most recently defeated Maryland 1-0 in overtime. Penn State holds a secure No. 2 spot in the Big Ten with Ohio State ranked first with a 7-2-0 conference record. On Friday, the Nittany Lions will look to continue their winning streak as they face fellow Big Ten opponent Purdue.

The Boilermakers will travel to Jeffrey Field/ University Park in their final regular season road game. Last year when the two sides met, the Nittany Lions earned three points with a 1-0 victory. For Purdue, Friday’s game will determine its postseason fate. With only two regular-season games remaining, it all comes down to Friday night under the lights.

Purdue’s Maddy Williams looks to add to her scoresheet after netting her 10th goal of the season last week. Williams became the first player in program history to earn a pair of 10-goal seasons. With another tally this weekend, she could break the all-time program record in scoring.

The Stanford Cardinal are on a 12-game unbeaten streak with their most recent win over Oregon on Thursday. The Cardinal hold the top spot in the coaches poll and Pac-12 and will look to extend their all-time record against Oregon State on Sunday. Against the Beavers, the Cardinal hold a 23-1-0 record with the one loss dating back to 2003. Stanford has yet to concede a goal at home and has scored 34 goals at Cagan. The Beavers will have a big test on Sunday as they visit the high-flying Cardinal. Senior forward Emma Jones leads Oregon State with two goals on the season. On the other side of the field, freshman Cardinal forward Catarina Macario leads her team with 11 goals and seven assists. Stanford still holds the top spot for their scoring offense with 3.93 goals per game.

Which Catarina Macario goal was better, 1 or 2?

On Thursday night, senior midfielder Andi Sullivan earned a start in the USWNT friendly against South Korea. This is the first USWNT appearance for Sullivan since suffering an ACL tear last NCAA season.

UNC has won all six of their conference matchups and will return home to WakeMed Soccer Park to host conference opponent Louisville on Sunday. On Thursday, the Cardinals earned one point after drawing with Wake Forest 0-0. Meanwhile, the Tar Heels are coming off a 4-0 road win over Virginia Tech on Thursday night, led by Julie Ashley and Alea Hyatt, who each scored their first career goals. The ACC is led by Duke with a perfect 8-0 record, but the Tar Heels are not far behind with 21 points and a 7-0 conference record. The Cardinals have some work to do, holding 10 points and sitting in eighth place.

Louisville freshman Emina Ekic leads the team with seven goals and three assists. For the Tar Heels, it is also a freshman who leading the way in scoring. Forward Alessia Russo has eight goals and has chipped in an assist. The Tar Heels have four players with five or more goals on the year. As a team, UNC ranks No. 9 with a 2.62 scoring offense percentage.

Next up, Cards travel to Cary, NC to face UNC! #GoCards pic.twitter.com/HHSW7RBzji