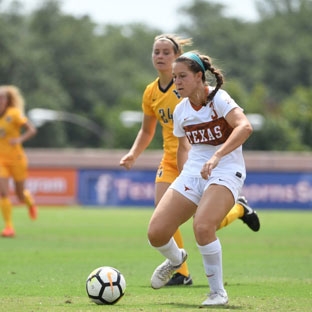 The Longhorns’ win proved notable for many reasons. Texas’ victory marked the first Big 12 loss for West Virginia since 2014, as the Mountaineers entered Sunday’s match 22-0-2 over their last 25 league contests; it served as just the second Big 12 loss ever for West Virginia as the Mountaineers entered the match 36-1-3 all-time in league play; it represented the first Big 12 road loss for WVU since 2014 (10-0-2 over its last 12 league road tilts); it was Texas’ first win over a top five team since defeating No. 5 Oklahoma State 1-0 on Oct. 22, 2010; and it marked the Longhorns’ first victory over West Virginia since 2004 (was 0-5-1 over that span).

Texas remains the last unbeaten and untied team in NCAA Division I women’s soccer, has now posted three consecutive shutouts for the second time in 2017 and has held opponents scoreless over the last 317:16 of match time.

Take a look at some of the vital numbers from No. 17 Texas’s soccer win over No. 5 West Virginia! #RAMPED pic.twitter.com/gcRtBIGCfz

Sophomore goalkeeper Nicole Curry registered her seventh clean sheet of the campaign, moving into first in the Big 12 in the category and into a tie for fifth all-time in Texas single-season history for shutouts alongside former Longhorns Abby Smith (2012), Alexa Gaul (2011), Dianna Pfenninger (2006, 07) and Jaime Strong (1994).

For Hintzen, the goal was her team-leading fifth of the season, her fourth match-winning tally and marked the first time any Longhorns player had scored against the Mountaineers since 2013. Junior midfielder Katie Glenn was credited with her third assist of the year by threading the key pass to Hintzen from near the left end line.

Early on in the contest, it was West Virginia that managed the initial shot of the contest at 2:33. Off a cross in from the left wing, All-American forward Michaela Abam attempted a quick contested shot from inside the 18 that popped up and over the bar.

With the Mountaineers setting the pace early on, Texas’ offense began settling in during the seventh minute. Hintzen did solid work up the left wing and crossed a ball towards the back post, but the feed proved a little too tall for a teammate to get off any shot.

In the 10th minute, WVU had its first great scoring chance when defender Bianca St. Georges found some space behind the UT backline. A through ball hit her in stride as she raced in towards the right post. Texas sophomore defender Atu Mshana raced back, however, and quickly cut down the angle to deflect a shot away.

Glenn recorded the Longhorns’ first shot at 13:26 on a lengthy effort from 26 yards out that was blocked out front.

No. 17 @TexasSoccer gets the upset win to remain the only undefeated/untied team in NCAA Division I. #HookEm #RAMPED pic.twitter.com/hMnVrtfyDR

With both offenses finding more space as the first half wore on, redshirt sophomore Mikayla Flores made the first of many threatening forays into WVU territory during the 31st and 36th minutes. First, she beat a defender for a ball out on the left wing and fired a shot from 10 yards out right into the arms of Mountaineer keeper Rylee Foster. Secondly, she located some space out on the right side and tried her luck from 21 yards out, but her try landed on the top of goal.

Over the last 3:01 of the opening half, West Virginia managed strong pressure through two shots on goal. On the second, Heather Kaleiohi fired a line drive from 18 yards right into Curry’s waiting arms.

Out of the locker room, WVU quickly earned a corner and got a headed shot high of frame from midfielder Alli Magaletta at 45:56.

From that point, the Texas offense took control, managing a 6-1 shot advantage over the opening 25 minutes of the second stanza.

Flores got the assault started at 49:59, battling her way between two West Virginia defenders to find some space to fire a shot on frame from 14 yards out.

After a great battle up one of the wings by UT redshirt freshman forward Cydney Billups, Hintzen delivered a ball to the middle. Flores corralled the pass, moved middle and drove another contested effort just a foot over the crossbar.

With the Longhorns offense swarming, freshman forward Haley Berg received a pass and moved deftly to her left, forcing another Foster save at 63:47 on a left-footed try from 12 yards.

As things began to open up down the stretch, West Virginia finally found some offensive life at 71:20. Off a cross from the right wing, Jade Gentile leapt above the crowd and got off a header from the middle of the 18 but it traveled wide left.

Texas came desperately close to finding pay dirt at 72:57 off a corner as junior midfielder Kayra Dollas’ header from seven yards out at the left post was saved off the line by a WVU defender before being cleared.

Right back the other way, WVU’s Abam forced another Curry stop as her shot from a tough right side angle was forced over the end line for a corner.

After coming so close throughout the second half and with time running short, the Longhorns finally broke in front at 87:40. Glenn moved up the left wing towards the end line before turning and passing a ball between two defenders. Hintzen took control just outside the top left corner of the six-yard box and unleashed a quick shot that beat Foster into the right side netting for a stunning 1-0 lead.

Forced to chase an equalizer with just 2:20 left on the clock, the Mountaineers came frighteningly close to tying the match at 88:16. Abam gained possession of the ball inside the six-yard box and fired a point-blank effort that Curry somehow managed to smother between her legs just inches outside the goal mouth.

West Virginia had one final opportunity to get back even at 89:16, but forward Sh’Nia Gordon’s late effort traveled high of frame as Texas sealed a huge victory.