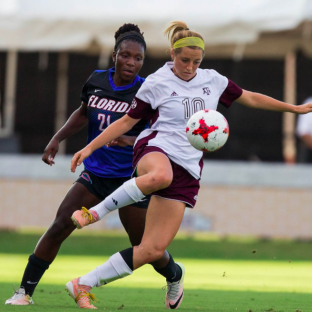 COLLEGE STATION, Texas – The Texas A&M Aggies scored a 2-1 victory over the No. 6 Florida Gators Thursday evening at Ellis Field with the game-winner coming on Kendall Ritchie’s first career goal.

It marked the second win of the year for the Maroon & White over a Top 25 opponent, in addition to their 5-1 victory at then-No. 19 Kansas on Sep. 10.

Ritchie scored the game-winner in the 66th minute. Taking a free kick from 45 yards out left of the center circle, the left-back sent a boomer that arced over goalkeeper Kaylan Marckese, who was playing two steps outside the six-yard box, before tucking under the crossbar.

Texas A&M (5-2-1, 1-1-0 SEC) broke the scoring seal in the 34th minute off the foot of Cienna Arrieta. Arrieta, who entered the match in the 32nd minute, received a throw-in from Emily Bates, took one touch to clear the defense and then uncorked a low, driving shot from 25 yards out right of the arc. The missile found a sliver between the left post and a diving Marckese for the ice-breaker.

The Aggies took a 1-0 lead into the intermission of an evenly contested first half. The shots were even (8-8) and the Maroon & White held slim edges in shots-on-goal (4-3) and corner kicks (2-0).

Here’s a look at the game-winner by @ken_ritchie19 on the free kick from distance! #12thMan pic.twitter.com/wRKIJ5Wj41

Florida (7-2-0, 1-1-0 SEC) pounced on the Aggies for an equalizer just 89 seconds into the second half. Gabby Seiler and Deanne Rose worked a two-player combo to net the goal. Seiler sent a pass from the center line to Rose just outside the offensive side of the circle. Rose played the ball back to Seiler who was on the charge. Seiler drove a ball towards the top of the penalty box and a race ensued between three Aggie defenders, goalkeeper Cosette Morché and a sprinting Rose. Rose won the race flicking a shot off the first bounce over Morché at the penalty spot. The volley took one bounce before finding the goal.

Texas A&M was unlucky on two occasions with Ally Watt hitting the crossbar from 15 yards out in the 25th minute. In the second half, Stephanie Malherbe blasted a shot from 20 that hit the wrong side of the left post.

Morché logged four saves in goal for the Aggies with her biggest coming in the 37th minute when she stonewalled a shot by Melanie Monteagudo from seven yards out.

The victory gave the Aggies’ a 7-6 edge in the all-time series against their intersectional rivalry.

Texas A&M returns to action Sunday when they travel to Columbia for a 5:05 p.m. contest against the Missouri Tigers.