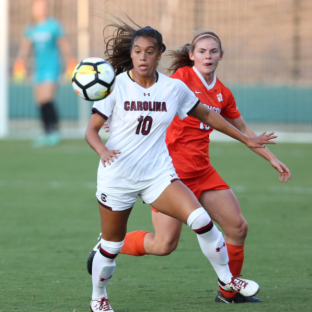 CLEMSON, S.C. — Sophomore striker Elexa Bahr’s first-half goal lifted No. 7 South Carolina women’s soccer to a 1-0 victory over No. 4 Clemson in Friday night’s top 10 battle at Riggs Field. The win earned the Gamecocks a point in the Palmetto Series and improved their record to 6-1-0, while the Tigers (6-1-0) suffered their first loss of the season.

Bahr’s game-winner came in the 17th minute when she received a perfectly-placed through ball from Gamecock senior Savannah McCaskill. The striker slipped the ball in between a pair of defenders to Bahr, who charged into the box before beating Clemson goalkeeper Sandy Maclver on the one-on-one opportunity. The goal marked her fourth tally of the season, while McCaskill’s assist on the scoring play gave her 100 points for her career.

Carolina’s defense held strong in the final stages of the match against a Clemson squad that put five shots on goal. The Tigers saw multiple chances for a late equalizer, starting in the 74th minute when they were awarded a free kick from 32 yards away. Clemson defender Sam Staab took aim at goal on the kick before sending the ball over the net. Five minutes later, Tiger midfielder Kimber Haley collected a loose ball near the top of the box and rifled a shot that missed wide left with a handful of Carolina defenders standing in the way. Clemson saw one final chance in the last minute on a corner kick, but forward Mariana Speckmaier’s ensuing shot sent the ball wide right.

“We knew coming in that it would be a battle. I’m very proud of these girls, and they found a way to win tonight,” South Carolina coach Shelley Smith said. “We are good at home and good on the road – that’s what you need. We want these experiences, and we want to know we can play good soccer no matter what field we are on. To come out and get a win is tremendous, and credit to the seniors who led tonight.”

A pair of crosses from McCaskill nearly put Carolina on the board in the early going. The Chapin, South Carolina, native whipped in a pass from the right side in the eighth minute, sending the ball towards Gamecock freshman attacker Ryan Gareis in the heart of the box. Maclver stymied the chance after coming off her line to scoop up the pass. In the 12th minute, another cross by McCaskill led to a dangerous loose ball in front of net before the Clemson defense cleared the danger.

The Gamecocks and Tigers traded possession early in the second half, and the teams combined for just one shot attempt over the opening 28 minutes of the period. Carolina attempted two shots over the final 45 minutes on a pair of plays that involved McCaskill. The senior fed the ball to Gareis near the left side of the box in the 79th minute before the first-year forward hit a shot that missed high and left. McCaskill nearly provided the exclamation point in the 86th minute when she raced into the box all alone. Maclver produced a quality save to prevent the goal after she came off her line and blocked the shot with her leg.

South Carolina sophomore goalkeeper Mikayla Krzeczowski finished with five shots to earn her fourth shutout of the season. All five of her stops came in the second half for a Gamecock team that held the Tigers to just one corner kick. Clemson held a 10-3 shot advantage for the match, while both teams racked up double-digit fouls.