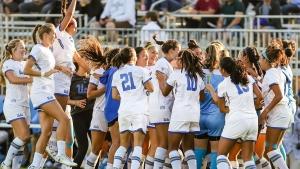 
Powered by the grit and elusiveness of Jessie Fleming, No. 4 UCLA took down defending national champion No. 1 Florida State, 2-1, Thursday night.

So when did the Seminoles (2-1-0) lose control of the match in Los Angeles?

Eight minutes in, two Bruins (3-0-0) headers on goal were blocked. Soon, the ‘Noles would relinquish the match’s first goal at the 14th minute, off Jessie Fleming’s deceptive tap-in.

Great passing all the way around from @kaarrriiinnaa and @fishelmia and a clinical finish by Jessie Fleming puts UCLA ahead 1-0!
Watch on https://t.co/DwOl2mbsfP.#GoBruins | #BattleAtTheBanc pic.twitter.com/J8Ubb5JVUp

UCLA’s clean and assertive first half was topped off in the 35th minute by, who else, Fleming — one of many women featured on the MAC Hermann award watchlist. About six yards outside the penalty box, the midfielder stroked her second goal of the night just strong enough to evade Caroline Jeffers’ fingertip save.

For the majority of the game, FSU never could find a rhythm on offense. The Bruins dominated ball possession until the clock hit 80. The ‘Noles left a mark in the 76th minute with Jaelin Howell’s first goal of the season, but it was not enough to inspire another scoring push.

FSU will stay in L.A. for a top-3 matchup against No. 3 Stanford on Sunday, while UCLA will host Florida on Sunday.

The Lady Volunteers (2-1) travel to New York City to face Columbia on Sunday, and Rutgers (3-0-0) hosts Providence on Sunday.

Shock continued into the 11 o’clock hour, when No. 24 Texas fell to Denver, 3-0. Hannah Adler scored the first two, and Samantha Feller chipped the final goal from the outside.

Following FSU-UCLA, the only other top-20 match of the day featured No. 18 Kansas and No. 20 Memphis. And it ended intensely. Tied 1-1 with 65 seconds remaining, the Jayhawks’ Katie McClure squeezed the game-winner through a bounty of defenders.