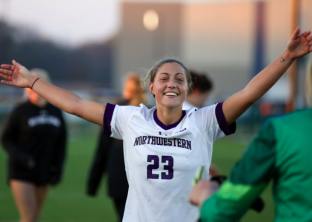 What’s better than having one Big Ten semifinal game end with a double-overtime game winner? How about two.

In the first semifinal, the Nittany Lions and the top-seeded Buckeyes were scoreless until PSU sophomore Laura Freigang scored the game-winner in the final minute of the second extra period, coming after Penn State had registered eight previous shots on goal. In the opening round, PSU defeated No. 4 Rutgers in penalty kicks.

Three hours later at Grand Park in Westfield, Indiana, the Wildcats advanced in similar fashion when senior forward Maria Fayeulle broke a 1-1 tie with 5:42 remaining in the second overtime period to fill out the finals bracket.

Freigang’s goal was her fourth of the season while Fayeulle’s was her first since her sophomore season.

Penn State and Northwestern will face off Sunday afternoon at 2 p.m. ET for the Big Ten championship. The game can be seen on the Big Ten Network. The Nittany Lions won the only head-to-head matchup of the season 3-0 back on Sept. 14. The Wildcats are seeking their first win against Penn State since upsetting the Nittany Lions in the first round of the 2014 conference championship.