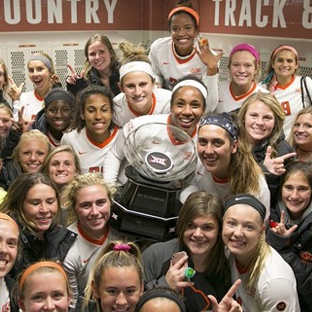 AUSTIN, Texas – Oklahoma State captured the Big 12 Conference championship Friday night in the regular season finale at Mike A. Myers Stadium as the 15th-ranked Cowgirls knocked off No. 8 Texas, 1-0, in overtime.

Laurene Tresfield’s golden goal at the 99:16 mark gave OSU the title, which marked the sixth conference crown in program history and first since 2011. The Cowgirls have now won three regular season titles, previously earning those in 2008 and 2011; they claimed conference tournament championships in 2003, 2009 and 2010.

Woke up this morning and pinched ourselves… nope, not dreaming, still Big 12 champions! #GoPokes #okstate pic.twitter.com/qqSW1iAevQ

The win was the fifth in a row for the Cowgirls, who improved to 15-2-2 overall and finished with an 8-1-0 record in Big 12 play. OSU was picked to finish sixth in a preseason vote of the league’s head coaches.

The match saw OSU control much of the play and outshoot the Longhorns (13-2-2, 5-2-2) by a 16-13 margin, including an attempt by Jaci Jones that caromed off the crossbar with just 83 seconds remaining in regulation.

It’s late, but we’re too excited to sleep so we’ll share some post-game reaction from BIG 12 CHAMPIONS @coachcolin_osu & @michela_ongaro pic.twitter.com/uSC1g3h0DA

The Cowgirls also recorded a 9-4 advantage on corner kicks, and it was on the final corner kick that OSU claimed the match’s lone goal as Anna Beffer delivered a ball into the box that Tresfield headed top shelf to the far post for the score. The goal was Tresfield’s second of the season, while Beffer added to her Big 12-best assist total with her 10th of the year.

Michela Ongaro finished with four saves to record her fifth shutout of the season and fourth in conference play.