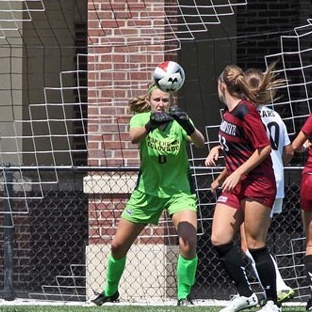 Several years ago, Tim Barrera’s cell phone rang, like it does with little irregularity.

On cue, one glance, and he noticed the incoming call had a California prefix.

Ten minutes later, Barrera was cautiously optimistic about the call.

Fast forward to today: That phone call is arguably the most lucrative Barrera has taken.

“He asked me ‘How would you like a 6-foot goalkeeper?'” Barrera recalled.

Barrera, never one to exude excitement, calmly answered ‘Sure, who wouldn’t? What do you have?'”

The answer was Madeline Burdick, a lanky 6-footer who was oozing with athleticism. She could jump. She could slide, read, predict and instruct.

In short, she was the whole package.

After a quick trip to San Diego, Barrera knew he wouldn’t have to recruit a goalkeeper for his University of Northern Colorado soccer team for awhile.

Burdick fit the bill — then and now, partway through her senior season.

Scheir “told me that she was one of the many kids in California that gets overlooked,” Barrera said. “We went to California to watch her practice and watched her play a match.”

Barrera was sold, as long as he could convince Burdick Colorado winters aren’t as bad as advertised, UNC has a first-class soccer facility, she’d receive a top-notch education and enjoy playing soccer all at the same time.

“I knew we wanted her,” Barrera said. “It just so happens, we were in need of a young goalkeeper.”

Trading in daily 75-degree temperatures, the lure of the beach and Pacific Ocean wasn’t as tough a decision as one might think.

“Well,” Burdick said, “I’m not a huge beach or sand person and I have a huge fear of sharks. For me, it’s about experiencing everything in life that I can.”

Adjusting to Colorado’s sometimes harsh winters was a bigger adjustment.

“My freshman year and that first Colorado winter was a little tough,” Burdick joked. “I got some sweatshirts, jeans and shoes that were better than low traction.”

There was no joking about Burdick’s upside, right from the get-go.

“She came in here and had an impact right away,” Barrera said. “It’s rare to get a goalkeeper that tall with the athleticism to play the position well. Then to get better is pretty rare, too.”

Burdick’s attention to little details and devotion to the sport doesn’t mean she’s a soccer junkie.

“I follow it,” she said. “I follow it on profiles on Instagram and I’ll watch soccer highlights, but I don’t go out of my way to look for when it’s on television or online.

“I came from a baseball family. We’d go to a pro baseball game rather than a pro soccer match.”

Burdick has taken in a handful of Colorado Rockies games, but explained that it’s not always easy to schedule around her busy slate of classes and soccer workouts.

“And I’ll always be a Chargers fan, but now they’ve left (San Diego) and the Padres aren’t that good, so it’s been a little tough,” Burdick said.

“She’s phenomenal,” UNC goalkeeper coach J. Landham said of his prized pupil. “She does so many things really well.

“I’ve worked with players on the men’s and women’s side, and it’s like a sandwich. There’s a positive, a negative and then a positive. You work on the middle of the sandwich. If there’s a glaring issue, she wants you to tell her straight up. She has a desire to be the very best. Explaining everything in detail is a waste of time to her.”

“She was on the championship intramural girls basketball team at UNC a couple of years ago,” Barrera said. “That tells you how many athletic talents she has.”

Burdick’s statistics speak for themselves.

As a sophomore, Burdick started 11 matches and was the goalkeeper in the Bears’ BSC Championship game, recording three saves on shots-on-goal and three more on penalty kicks in the Bears’ road victory.

She piled up 50 saves for the season with an off-the-charts 0.847 goals-against average.

As a freshman, she showed a lot of the promise Barrera had witnessed in California, recording two saves in the matches she saw action.

Maddie Burdick has 7 saves today, and hasn’t allowed a goal in 155 minutes. pic.twitter.com/FZR119kd07

“We know that it’s going to take a really good attack to get one by the UNC goalkeeper,” University of Arizona coach Tony Amato said before the NCAA playoffs. “We haven’t really a weakness in her at all. She seems to do everything by the book and does it really good.”

MORE: Red-hot Gonzaga off to the best start in school history

The numbers don’t speak to Burdick’s ability to communicate with her teammates throughout the match, successfully setting up the defense a lot more often than not.

“I’ve been a goalie as long as I can remember, though,” Burdick said. “I did play field hockey and softball. I was a defender with more range to do things in field hockey and I played shortstop and third base in softball.”

“Yeah,” Burkick laughed, “It’s more about the range and taking good angles to get to the ball. At third base, my height and reaction time was why I was there.”

Fielding a short hop from a midfielder reminds Burdick of her days as a shortstop.

“That, and being able to move side to side,” Burdick said. “It’s amazing how similar the two (positions) are.”

Bring on the accolades

“Well, she’s one of the best, that’s for sure,” Barrera said. “We’ll see in the next few weeks, but she’s definitely as good as any goalkeeper in our conference. We’re glad she’s on our side.”

The Bears took the W at home last night, here’s how it happened: pic.twitter.com/zhTbz5RHnn

As a freshman, Burdick shared goalkeeping duties with Kaitlin Ruff, whom she calls “a very close friend,” as the two stay in constant contact.

“Kaitlin was a good goalkeeper, but Madeline was playing so well, we had to play her and she benefited by playing with Ruff every day in practice,” Barrera said. “It helped her mature as a player and the competition made her train even harder. The two of them really pushed each other.”

Burdick pushes herself in the classroom, too.

She has a 3.3 cumulative grade-point average as an audiology/speech language sciences major.

Translated, Burdick hopes to someday work in a smaller school district as a speech language pathologist.

“That means I want to work just as much with language and articulation as hearing,” Burdick explained. “That would be wherever life takes me. I also want to coach soccer. I’ll never be ready to just quit playing. It would be great to be a goalie coach and then hop in for a couple of drills now and then.”

Burdick’s confidence has grown since her freshman season. Likewise, her teammates know she can usually make up for their mistakes.

“We know that if we’re not perfect, we can rely on Maddie,” Muriel Gutierrez, the Bears’ biggest scoring threat, said after the team’s victory over Colorado State University this season. “She’s that good.”

On a scale of 1 to 10, Burdick quietly gives herself an eight, giving credit to UNC’s coaching staff.

“I think I struggled with my confidence as a freshman, coming from being the top goalkeeper on my club team to not playing all the time,” Burdick said. “Overall, it was good for me though. It made me a lot stronger mentally.”

It’s the mental aspect of being the last defender on the field that inspires Burdick most.

“I have a constant balance of communication with our defenders,” said Burdick, a co-captain for the Bears. “For the most part, I let them know the direction everything is going and what I expect from them.”

Added Landham: “She understands tactics and technique very well. She translates my words into her own actions. She knows the concepts of being a goalkeeper as well as anybody. There’s a monotonous side of goalkeeping where an opponent won’t threaten to score for long periods of time, and that’s where a goalkeeper has to set up the defense and organize the back line. She does that really well.”

One month left, and counting

Burdick and Barrera are peeking ahead to possibly winning the BSC regular season and then the postseason tournament in order to return to the NCAA playoffs.

“I’d say we’re a better program now than we were even two years ago when we went to the playoffs,” Barrera said. “It’s always nice when you have depth and a lineup that can compete well.

“Having a solid goalkeeper like Maddie gives you even more confidence. She has always had the shot-stop capability from the first times I saw her, but she understands the game so much better now.”

Burdick has grown into her position, a fact that Barrera explained is so crucial to a goalkeeper also being a team leader.

“She distributes the ball properly and she makes the commands of her defense,” Barrera said. “You have to be a leader to be able to do all of that successfully.

“She brings a lot to our team. She was pretty quiet when she first came here, but she had all the tools to be really good. Now, she does everything you want from a goalkeeper. She’s adapted to everything here. As good as she was when we saw her in California, she’s progressed in every part of her game to be a really, really good goalkeeper.”

This article is written by Samuel G. Mustari from Greeley Tribune, Colo. and was legally licensed via the Tribune Content Agency through the NewsCred publisher network. Please direct all licensing questions to legal@newscred.com.