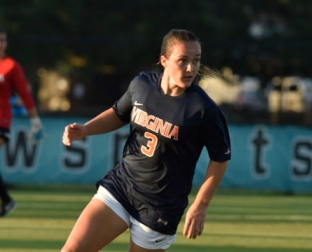 MORGANTOWN, W.Va. – Megan Reid came up with the golden goal on Thursday night, finding the back of the net in the 106th minute as No. 10 Virginia defeated No. 2 West Virginia by a score of 2-1.

Following a foul in the second overtime period, the Cavaliers got a free kick from just outside the top left corner of the box. Virginia played the ball in where it was loose in a scrum before Montana Sutton tapped the ball forward to Reid, who slipped it past the keeper on the left side for the win.

It’s only the third regular-season win by a road team at West Virginia dating back to the season opener of the 2014 season.

Virginia will now return home, hosting Liberty at 2 p.m. on Sunday in the home-opener for the Cavaliers.

It was a defensive battle through the first half, with both teams prodding at the other’s defense trying to find an opening.

The Virginia defense came up with a big play in the 10th minute as the home-standing Mountaineers got a player loose on a breakaway, setting up a one-on-one situation. As the West Virginia player set up to take her shot, Virginia defender Phoebe McClernon stepped in front of the shot, blocking it and keeping the match scoreless.

At the half, both teams had one shot on goal with each keeper posting a save of that shot. The Mountaineers held the overall advantage in shots, leading the Cavaliers 6-to-3 in that category.

In the 51st minute, Ziemer got an opportunity off a corner kick when she received the ball at the top of the box, centered and fired a strike that sailed high just over the crossbar. The second great chance came on back-to-back shots from Courtney Petersen and Gorzak in the 61st minute. Petersen’s shot was blocked by a West Virginia defender, but Gorzak made a nifty move to take the ball away from a Mountaineer player, stepped around her and fired a shot that bent toward the upper corner of the near post, but also sailed high.

MORE: For No. 1 WVU, its College Cup or bust

The Cavaliers snapped the stalemate in the 68th minute with a breakaway that resulted in a goal from Ziemer. A long ball down the field was gathered by Gorzak as the sophomore raced down the field, beating the West Virginia defense to the ball. As the defenders recovered, Gorzak sent the ball across to Ziemer at the top of the box. Ziemer made a move around the defender and sent her shot in past the right post for the 1-0 lead.

West Virginia tied the match in the 78th minute as a foul set up the scoring opportunity for the home team. Bianca St. Georges took the free kick, sending the ball in to the left post where Alli Magaletta leaped for the header and put it in past the right post for the equalizer.

Knotted at a goal each at the end of regulation, the two squads battled through a scoreless first overtime period that saw the home-standing Mountaineers play the role of early aggressor.

Virginia reversed the trend in second overtime period with a measured pressure that resulted in a near miss on the first shot from the Cavaliers in the 103rd minute before Reid would hit the game-winner in the 106th minute.