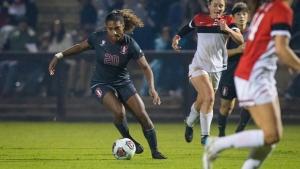 
STATE COLLEGE, Penn. – Catarina Macario netted a brace to lead No. 3 Stanford to a 2-1 win at No. 6 Penn State to start the 2019 season on Friday night at Jeffrey Field.

In front of a crowd of 5,238, the second-largest crowd in Penn State history, the Cardinal (1-0-0) claimed a win to open its regular season for the ninth-straight season. Macario, the reigning MAC Hermann Trophy winner as the best player in college soccer, netted on either side of halftime and Lauren Rood (1-0-0) made three saves to earn the win in net. Stanford took the lead with a brilliantly-taken chip from Macario but Penn State equalized before halftime, setting up Macario’s game winner in the 49th minute.

The Nittany Lions (0-1-0) started on the front foot, forcing a diving save by Rood in the eighth minute before Stanford responded with a series of scoring chances. The Cardinal had its first opportunity in the 10th minute when Sierra Enge’s shot from the edge of the area was blocked, followed by a dangerous cross off the foot of Beattie Goad which was handled by the keeper.

Stanford scored the opening goal in the 17th minute courtesy of some individual brilliance from Macario. Collecting the ball at the edge of the 18-yard line, Macario juked several Penn State defenders before creating a yard of space and lofting a perfectly-placed chipped ball inside the upper right-hand corner.

The Cardinal survived a wave of pressure from Penn State in response to the goal, blocking a dangerous free kick before a follow-up attempt sailed wide of Rood’s goal. Stanford had chances to double the lead but the Nittany Lions equalized in the 35th minute when Kate Wiesner’s shot from outside the box beat Rood at her right goalpost.

Stanford wasted no time restoring the lead after halftime with Macario netting her second goal of the night in the 49th minute to make it 2-1. After a beautiful one-two with Madison Haley, Macario had one defender to beat, cutting inside before curling a shot inside the far post.

In the 59th minute, Macario’s threaded through ball found the run of Sam Tran, but the goalkeeper was off her line to get a fingertip on it and quell the danger. Moments later, Macario’s set piece delivery from the right edge of the box found the head of Haley, who nodded it wide.

BEEF UP YOUR 2019 SOCCER KNOWLEDGE: Essential things to know this season

No. 3 Stanford wraps up its season-opening road trip on Sunday at 9 a.m. PT when it faces No. 11 West Virginia in State College. Live statistics will be available at GoStanford.com.