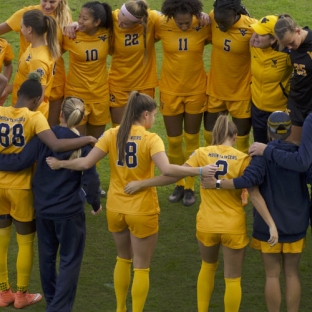 During their team meeting at the beginning of the season, the goal laid out for the West Virginia women’s soccer team was clear; win the national championship.

Last season, WVU took home the Big 12 championship en route to their first ever College Cup appearance, but their journey for the national championship fell one game short as they were defeated in the title game by USC, 3-1.

This year they’re determined to reverse that ending.

Ranked No. 1 in the United Soccer Coaches’ poll, the Mountaineers’ new journey began last Friday as they traveled down to Washington, D.C., battled the heat, and earned a tough 1-0 win over No. 5 Georgetown – some revenge as the Hoyas were the lone team to beat WVU in the regular season in 2016.

But with a two-game slate in Morgantown, W.Va. this weekend – they host No. 10 Virginia on Thursday and Duquesne on Sunday – coach Nikki Izzo-Brown and company are looking to build off their start, knowing just how big the target on their back is this season.

“We’ve got to take care of the ball better,” coach Nikki Izzo-Brown said. “I think we sat back a little bit too much after the 1-0 score and needed to be more productive in the attack. So those are things we need to improve moving forward, but you only have to win by a goal.”

“I think it (being a target) almost helps us because we know that every team is going to try and come out and beat because it’s like their World Cup,” junior forward Grace Cutler said.

Cutler, along with fellow junior forward Sh’Nia Gordon, who registered an assist in the opener, used an opportunity to continue to play during the summer offseason as a way to enter this season with a more polished game.

Both forwards competed stints in the Women’s Premier Soccer League, an independent national league whose season runs from the beginning of May through the end of July, where they had the opportunity to play against fellow collegians from across the country.

Feeling like she was in good playing shape at the end of last spring, Cutler made the decision to leave Morgantown for the summer as a way to get more touches to supplement her conditioning.

“I worked a lot with my shooting and timing of my runs,” Cutler said. “I’m a center forward now so it was a little bit of a position change. Being able to play 90 minutes in these summer league games allowed me to work through how to time runs, not go offsides, and how to take the correct touch at the right angle.”

Gordon, who made the 2016 NCAA College Cup All-Tournament team, echoed her teammate’s sentiments after appearing in seven games for the Seattle Sounders and putting up nine points (4 goals, 1 assist).

“I wanted to be in an environment of playing soccer and not just working out all the time,” Gordon said. “The team consisted of players from all over the country like Penn State and Stanford. I felt like it got me better and got me ready for this season.”

The impact of their summer outside campus hasn’t gone unnoticed either.

“I think anytime you can get another experience from another team, another coaching staff, you’re going to gain something,” Izzo-Brown said. “Both are huge leaders for us and gained that type of confidence to develop our younger players and be those role models.”

The Mountaineers continue to sit atop the United Soccer Coaches Poll | https://t.co/R5M6p7alSr pic.twitter.com/d6z9fhEuO0

That development as the season progresses is going to be key if the Mountaineers want to complete their goals for 2017. Georgetown was the start, but with the two games this weekend, they know road to Orlando is only beginning.

“Since we went through that trap and made it to the national championship last year we know what the journey takes,” Cutler said. “But we definitely have to take it a game at a time, you can’t think about the national championship when you’re in the second game of the season. You have to focus on each game, you can’t look ahead, and focus on each opponent no matter their ranking.”