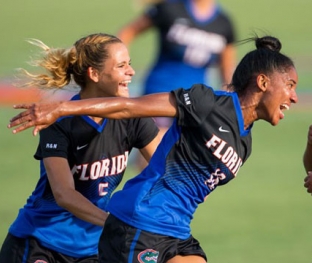 GAINESVILLE, Fla. – A Gator soccer 3-2 win over No. 1 Stanford at the Donald R. Dizney Stadium started the Florida Athletics big Friday off right. Florida soccer was the first of two Gator programs to face the nation’s top-ranked team tonight in Gainesville, as volleyball followed by beating No. 1 Texas in four sets at Exactech Arena/O’Connell Center.

What Led to the Win:

For the first 82 minutes, the Gators were either trailing or tied with the top-ranked Stanford soccer team.

That changed in the 82nd minute.

Laís Araujo followed the ball sent down the center of the box by Melanie Monteagudo. She held off her defender as the two challenged for possession. Araujo took a touch right to make a bit of space and then banged in a right-footed six-yard shot off the post and into the goal.

The Cardinal pushed play into the Florida half for much of those final eight minutes Goalkeeper Susi Espinoza made the stop on Stanford’s Catarina Macario’s shot in the 90th minute for the final play of the match.

And that registered Florida’s first win in six tries versus the traditional soccer power.

Florida twice tied the match. Stanford took the lead in the 25th minute when Macario volleyed in the deflection of Tierna Davidson’s shot. Junior Samantha Chung sent Florida to halftime with a 1-all tie. Freshman Madison Alexander’s pass from the middle of the box found Chung alone just above the center of the box. Her right- footed shot scored at the far post.

Stanford regained the lead in the 59th minute when Beattie Goad took the endline pass from Jaye Boissiere and scored at the near post from six yards. Florida again tied the match when Gabby Seiler headed in Mayra Pelayo’s cross. Her three-yard score at the far post tied the match at 78:32.

Araujo’s goal was her first of her Gator career. The junior transfer is one of three on Florida’s 2017 team who played at the 2016 FIFA Under-20 World Cup, as Araujo was captain of the Brazil side.

Chung is making a successful return from the injury that ended her 2016 season as she scored the second goal of her Gator career and first of 2017. Chung suffered an anterior cruciate ligament tear in 2016 post- season action.

Monteagudo made her first appearance of 2017 today. Florida’s top returning scorer from 2016, Monteagudo sat out the season opening weekend of action with a calf injury. She played 29 minutes today and registered the assist on Araujo’s game-winning goal.

Seiler’s scored in each of Florida’s three matches this season to give her four goals in her Gator career. She scored 10 goals while playing with Georgia in 2013 and 2014 (redshirting 2015 season due to Southeastern Conference transfer rules).

Espinoza turned in a career-high five saves in goal tonight. She has played the entirety of each of Florida’s three matches this season – the first collegiate action of her Gator career.

This was Florida’s first win versus Stanford in the six-match series. Of the five previous meetings, four went to overtime. The Cardinal now lead the all-time series 4-1-1.

Each of the top four teams in the current United Soccer Coaches top-25 were upset in road action this week. Stanford shared the top spot with West Virginia and the Mountaineers lost 2-1 20T at No. 10 Virginia tonight. No. 3 South Carolina lost 3-2 at Wake Forest last night and No. 4 North Carolina fell 2-1 2OT at Central Florida.

What the Gators Said:

“We said two things to the team afterwards. One, this is why we have Gator Day. Gator Day for us is once a week and it’s a really hard practice. No one really looks forward to it, but our team has really been getting after it in those practices. And the end of this game felt like a Gator Day. I think that really help carry them through. The second thing we said was one game doesn’t define us. The things that we did in that game – our toughness, our grittiness and all that – that defines us. But the result itself doesn’t define us. Really happy with our ability to be resilient and come back twice,” said Florida head coach Becky Burleigh.

How crucial was it to get that first-half goal to tie the match?

“It was very crucial. I think we did a really good job of pressuring up top. I know Gabby [Seiler], Madi [Alexander] and Parker [Roberts] did very well pressuring up top. Madi won it, crossed it and I just finished,” sophomore Samantha Chung said.

When that second goal went in for Stanford, what was the reaction?

What happened on your goal? What did you feel when you scored?

“Mel [Monteagudo] passed the ball to me. I made the run and I made a cut. I knew if I shot it the first time, the girl could slide and could block the goal. So I took a quick cut and then kicked it toward the far post. I was so excited. I just wanted to run to the girls. I love my bench because they bring such energy to us. I just wanted to share the moment with them,” said junior Laís Araujo.