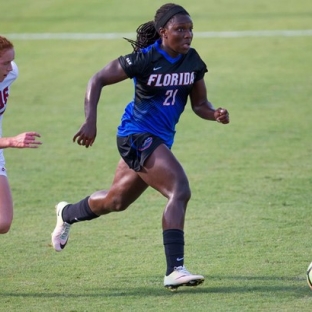 Through the first five weeks of the women’s soccer season, every Division I team in the country has suffered a loss or taken a draw – except for Texas. The Longhorns are the last perfect team in the nation as conference play gets in full swing, which set up major Week 5 matchups like Clemson-North Carolina, Alabama-LSU, and Cal-Washington.

Here are the best goals from Week 5.

The Mountaineers won their Big 12 opener on the road against Baylor, 2-1, in overtime. Heather Kaleiohi scored the game’s first goal in the 88th minute on this beautiful strike.

The No. 5 Mountaineers opened Big 12 play with a HUGE win at Baylor! Check out how WVU earned the three road points! #HailWV pic.twitter.com/PYXiLP8PlJ

After a physical run through the Colorado defense, Anika Rodriguez crossed the ball into the box, where Ashley Sanchez finished it for the game-winner.

The Tar Heels improved to 31-1-1 over ACC foe Clemson with a 1-0 victory over the Tigers. Madison Schultz’s strike glanced off the crossbar but Dorian Bailey was there to head in the game-winner.

Watch Dorian Bailey score in the 77th minute to give Carolina a 1-0 victory over Clemson. pic.twitter.com/liDYRPCO2d

Stanford’s attack looked like a pinball machine when scoring its first goal in a 2-1 win against Washington State. Tierna Davidson started a run on the Cardinal’s half of the field and got three teammates involved in the play before she scored the game’s first goal.

Freshman Karlie Paschall and senior Imani Dorsey joined forces for a give-and-go that resulted in Duke’s third goal in a 3-0 win against Virginia Tech.

The Gators pulled out a 2-1 win over Iowa State in overtime thanks to Deanne Rose’s pair of goals, including the game-winning golden goal.

Take a at @parkerrRoberts and Deanne Rose combining for today’s golden goal at ISU.