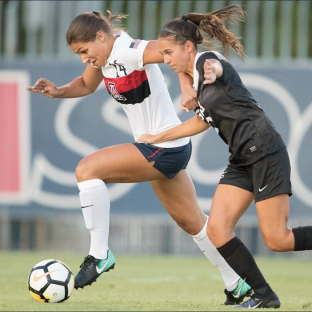 Women's soccer: Arizona takes down No. 11 Cal thanks to freshman's first career goal

TUCSON, Ariz. – The University of Arizona women’s soccer team defeated No. 11 California on Sunday afternoon in Berkeley, Calif. by a score of 1-0. True freshman Jada Talley followed her own rebound to score her first collegiate goal and put the Wildcats over Cal.

Charlotte Brascia led the team with four shots on goal, closely followed by two apiece from Cali Crisler and Gabi Stoian. Stoian earned 52 minutes of time on the pitch as she slowly returns from an injury in the Texas Tech matchup earlier this season.

Lainey Burdett made four saves in the contest to keep the Wildcats on top. The Arizona defense allowed 13 shots, but the majority of these were blocked by a defensive line that was unyielding to the Golden Bears top-25 offense.

WATCH: The best goals from Week 6 in women’s soccer

Arizona is back in action on Thursday, Oct. 5 in Tucson, Ariz., when the Wildcats will take on USC at 7 p.m. MST.