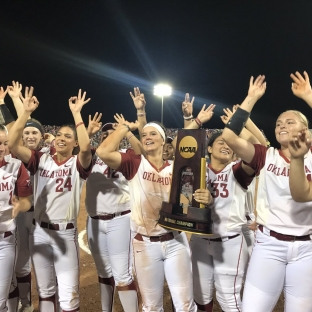 Once again, it was a heavyweight fight. Oklahoma offered the first blow with Nicole Mendes’ leadoff home run in the bottom of the first, her second in the Championship Series. But just like a night ago, Florida countered as Alexis Reynoso belted a solo blast to left field to tie the game at 1-1 in the top of the second.

WATCH: Game 2 highlights from the WCWS

With the bases loaded in the bottom of the second, Caleigh Clifton walked to trim Florida’s lead down to 3-2, and Shay Knighten claeared the bases with a double to the right center gap to make the score 5-3.

Florida threw one last punch with a run in the top of the third, but Oklahoma would hold from there.

Watch the final out from OKC as @OU_Softball clinches its second consecutive national title! #WCWS pic.twitter.com/Tm0SeVpwsj

Lopez (18-1), a freshman who made her first WCWS appearance, got the win in the circle for the Sooners, giving up one run on one hit and striking out two in 2.1 innings pitched. Junior Paige Lowary earned her 11th save of the season, coming in for relief for the final two innings.