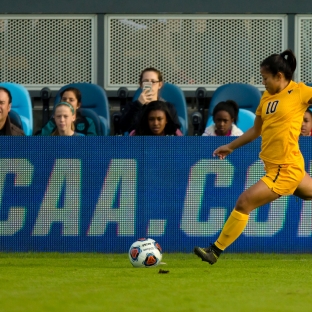 Women's college soccer: 10 must-see games that kick off the season

Schools around the country are in the midst of their preseason exhibition schedules, which means the regular season is right around the corner. Soccer fans are in store for a great opening slate of games, including a top-five matchup on the first official day of the season.

Here are 10 must-see games to start the 2017 women’s soccer season:

Soccer fans are in for a treat with this top-five matchup during the first day of the 2017 season. Newly-minted No. 1 West Virginia will travel to Georgetown, with the Mountaineers holding a 14-4-2 all-time record against the Hoyas. However, Georgetown defeated West Virginia 1-0 in double overtime in Morgantown, W.V., last season. It was the Mountaineers’ first home loss in more than two years, and now the Hoyas will have to try to find a way to win without graduated forward Grace Damaska, who scored the game-winner in the 102nd minute of last year’s match.

“Pressure is a privilege.” For the first time in 22 years, WVU opens a season at No. 1 #HailWV pic.twitter.com/stdf7FIL4I

Including an exhibition game in 2015, West Virginia is winless in its last four matches against Georgetown.

Just 11 miles, six spots in the United Soccer Coaches rankings, and two votes in the ACC preseason poll separate North Carolina and Duke. The in-state rivals were picked to finish second and third, respectively, in the conference, behinid Florida State. However, the Tar Heels have dominated the Blue Devils in the all-time series, leading 37-3-2. Both schools were ranked in the top 10 when they met last season, when they tied 0-0 after playing a game in tropical storm conditions in Durham, N.C.

Duke won the schools’ 2015 meeting 1-0 in Chapel Hill, N.C., thanks to a goal from then-sophomore forward/midfielder Imani Dorsey, ending a 10-year drought against North Carolina. Now a senior, Dorsey will try to end her collegiate career by helping the Blue Devils’ claim their fourth win in program history against the Tar Heels. This is a major season opener for both schools.

Like No. 1 West Virginia, No. 2 Stanford faces a difficult road test in August. After traveling to Milwaukee to play Marquette and Wisconsin in a three-day stretch, the Cardinal will fly south to Gainesville to square off against the Gators and redshirt senior midfielder Gabby Seiler, a member of the MAC Hermann Trophy Watch List. Stanford will attempt to keep its undefeated record against Florida (4-0-1) alive, while the Gators will try to pick up a non-conference win that would be as impressive as any this fall.

Practice No. 1 in the books! #GoIrish pic.twitter.com/EBFDLmpJYr

The Irish return nine starters, in addition to the return of senior defender Sabrina Flores and sophomore forward Natalie Jacobs, who both missed last season due to international competition. The Golden Gophers bring back 16 letterwinners from 2016. Expect a competitive match in Iowa.

Two former conference foes reunite in this non-conference matchup. UConn and Rutgers were once members of the Big East but have since gone their separate ways – the Huskies to the American Athletic Conference and the Scarlet Knights to the Big Ten. UConn has been nothing short of dominant in this head-to-head series, leading 16-5-4 all-time, but Rutgers has won the last three meetings, including a 4-0 thrashing in the third round of the 2015 NCAA tournament and a 2-0 win at No. 10 UConn last year.

This top-five matchup literally stretches from coast to coast as Georgetown travels to Stanford for an early season showdown. These two schools have only met a handful of times but the Cardinal have been dominant in both record and margin of victory. Stanford has a 4-0-0 all-time advantage against Georgetown, with a combined 15-1 edge in goals scored. The Cardinal won 3-0 last fall on the Hoyas’ home pitch with a trio of goals in an eight-minute span in the second half.

Getting after it on day . Time to make believers of them….#beepbeep pic.twitter.com/sdejmVAeP8

The state of Florida sees the North Carolina-Duke matchup and counters with Florida-Florida State. In a game between the 2016 SEC tournament champion and four-time defending ACC champion, the Gators and Seminoles will fight for supremacy in the state. Florida returns eight starters from last year’s Sweet 16 team, while Florida State boasts four members of the 11-player preseason all-ACC team.

First practice of the season. Let’s get to work. #GoNoles pic.twitter.com/MXnJUJio0O

Let’s stay with the in-state theme for Clemson-South Carolina. In September, the Tigers have as tough of a three-game stretch as any team in the country. Clemson plays No. 4 South Carolina, No. 18 Notre Dame and No. 6 North Carolina consecutively, beginning with the Gamecocks. After a 21-2-1 record last fall that included an 11-0 mark in the SEC, South Carolina will likely enter this matchup as the higher-ranked team in the United Soccer Coaches poll, but Clemson has the historical edge in this game.

Carolina opens the fall ranked inside the @UnitedCoaches Top 15 for the 3rd time in the last 4 years. pic.twitter.com/KKa4XgC3Px

The Tigers lead the all-time series 13-9-1, including an 8-3 home record against the Gamecocks. However, this annual matchup has gone back and forth in recent years. Both schools are 3-3-1 in last seven meetings, with South Carolina holding a 7-6 advantage in goals scored. The Gamecocks’ lineup will be anchored by a pair of players, who play on opposite ends of their formation, who were named to the MAC Hermann Trophy Watch List. They bring back striker Savannah McCaskill, who scored 10 game-winning goals last season – the most of any returning player in the country, and goalkeeper Mikayla Krzeczowski, who recorded a program-best 0.43 goals allowed average in 2016.

This is a rematch from last year’s NCAA tournament quarterfinals, where Duke recorded several statistical advantages but West Virginia won 1-0 to advance to the College Cup for the first time in program – and Big 12 – history. The Blue Devils, who were then the defending national runner-up after an appearance in the 2015 national championship, had a 17-12 shot advantage and 10-6 edge in corner kicks. However, Alli Magaletta, now a senior, scored the game-winner for the Mountaineers in the 16th minute off of a corner kick.

The 2017 campaign is closing in, so let’s take a look back at how the preseason has gone so far!

Duke and West Virginia have only played three times, the first in 2013, and they’re knotted with a 1-1-1 series record. This game represents an opportunity for revenge for the Blue Devils and a chance for the Mountaineers to stay on top of the women’s soccer world.

In the history of the BYU women’s soccer program, the Cougars have played the Utah Utes more times than any other opponent. BYU and Utah have met on the pitch 29 times and the Cougars hold a 21-7-1 edge. The two schools have met at least once a year since 1995. After the trio of California schools – Stanford, USC and UCLA – BYU and Utah are likely the next best teams out West. This game will be played at BYU, and ironically, the Cougars have a better all-time record against the Utes on the road rather than at home.