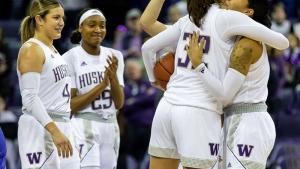 
There were 11 women’s basketball games Sunday between a top 25 team and an unranked team.

Unranked teams won seven of them. Here’s how they happened:

No. 8 UCLA attempted 20 more shots than Washington, almost made as many free throws (19) as the Huskies attempted (21) and had a plus-seven turnover margin, yet it was the home Huskies that won the game.

Washington’s Amber Melgoza scored a team-high 22 points with six rebounds and five assists, while Rita Pleskevich (15 points) and Ali Bamberger (12 points) also scored in double figures. The Huskies outscored the Bruins in each of the first three quarters, allowing them to hang onto the lead and the win when UCLA controlled the fourth quarter.

MARCHING TOWARDS MADNESS: 7 women’s basketball players who can impact the Final Four race

Alabama clinched an upset of No. 9 Mississippi State just before the final buzzer as Megan Abrams’ tip-in from under the basket fell in, giving the Crimson Tide a 66-64 win.

Alabama’s defense locked up Mississippi State in the key moments, limiting the Bulldogs to just 2-of-10 shooting down the stretch, including no made field goals in the last 3:24.

The Crimson Tide also benefited from a great 3-point shooting performance, 9-of-14 from 3, while the Bulldogs were just 1-of-8.

Colorado scored just 50 points in its win over No. 11 Arizona, but 15 of those points were scored in the Buffaloes’ final run — a 15-0 run to seal the upset. Arizona led 38-35 after Amari Carter made a 3-pointer with 6:35 left in the fourth quarter.

Jaylyn Sherrod’s layup with 5:23 left in the game gave the Buffaloes a lead that they wouldn’t relinquish. She scored a team-high 12 points, while Aubrey Knight also scored in double figures with 10 points.

Colorado outscored Arizona 21-7 in the fourth quarter. Perhaps most remarkably, Colorado finished the game just 1-of-14 from 3-point range. The Buffaloes were able to weather a poor night of outside shooting thanks to an incredible 48-27 rebounding margin.

Villanova’s Cameron Onken recorded the second triple-double in program history with 12 points, 10 assists and 18 rebounds as the Wildcats beat the 12th-ranked Demon Deacons by 18 points.

Madison Siegrist played all 40 minutes and scored a game-high 29 points (half of DePaul’s team total), along with 13 rebounds and not a single turnover.

Villanova shot 50 percent from the field, while DePaul made just 29.7 percent of its attempts, including a 2-of-24 mark from distance.

Despite Georgia Tech not making a single field goal in the final 6:53 of the fourth quarter, the Yellow Jackets were able to hang on for a 65-62 upset of No. 17 Florida State. Three starters scored in double figures — Francesca Pan (23 points), Kierra Fletcher (14 points) and Lorela Cubaj (13 points) — and made up 50 of Georgia Tech’s 65 points.

The Yellow Jackets out-rebounded the Seminoles 37 to 28, including 12 offensive rebounds.

Utah found itself trailing by nine points, 25-16, after the first quarter of Sunday’s game against No. 21 Arizona State. But the Utes clawed back and won, in large part because of a 26-15 advantage in the third quarter.

They made 6-of-9 3-point attempts in the third quarter and finished the game 11-of-21 (52.4%) from distance, while Arizona State made 10-of-20. Four Utah starters scored in double figures, led by Andrea Torres and Brynna Maxwell with 15 points apiece.

Torres’ 3-pointer with 3:27 left in the third quarter broke open a 50-50 game and gave Utah a lead that it would never lose.

Florida jumped out to a 10-point lead over No. 22 Arkansas, 26-16, after the first quarter, which was enough to buoy the Gators as the Razorbacks fought back in the second and fourth quarters.

Led by two 20-point scorers, Kiara Smith (26 points) and Lavender Briggs (20 points), the Gators’ backcourt carried the team offensively and the two players forced as many steals as they had turnovers (seven), essentially neutralizing any mistakes they made on offense.