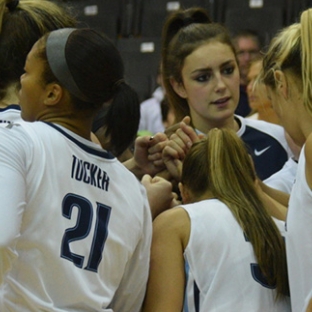 Women's basketball: Unbeaten Villanova is the NCAA Team of the Week

The first win in program history over No. 11 Duke improved Villanova to 3-0 on the young season and helped earn the Wildcats NCAA Team of the Week honors.

Behind the strength of 15 3-point field goals, Villanova opened up the home portion of its schedule on Nov. 19 with a 64-55 upset win over the Blue Devils. Sophomore Kelly Jekot led the way with a career-high 23 points that included 8-of-14 shooting from the field and a 7-of-9 effort from 3-point range.

The seven 3-point field goals represent a career-best performance for Jekot, who scored 17 of her 23 points in the second half to help Villanova outscore Duke by a 42-27 margin over the final two periods. Jekot was backed by Alex Louin, who finished with 17 points, nine rebounds, four assists and four steals, while Jannah Tucker added 10 points. Villanova was credited with an assist on 15 of its 20 field goals.

Earlier in the week in a 62-42 win over Lehigh on Nov. 17, Mary Gedaka and Adrianna Hahn led the way with 13 points each for Villanova. Hahn had a team-high-tying seven rebounds, while Gedaka pulled down six boards. Gedaka was a perfect 6-of-6 from the field. Jekot tallied nine points, six rebounds, two assists and two steals.

Ranked just outside of the top-25 in the latest Associated Press poll, Villanova returns to action on Friday, Nov. 24, when the Wildcats play James Madison in the first round of the Vermont Thanksgiving Tournament.