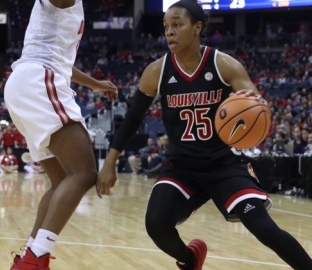 NEW YORK — What an opening weekend in college basketball as the stars shined and the top teams played liked contenders.

UConn showed it has moved past its shocking loss in the national semifinals last season with a rout of No. 10 Stanford in the top-ranked Huskies’ opener on Sunday. Asia Durr scored a career-best and school-record 47 points in the second game of the “Countdown to Columbus” doubleheader as she helped Louisville beat Ohio State 95-90 in overtime.

“I wanted to win badly, so badly,” Durr said. “Last year, we were on TV and we didn’t do so well, so we had to come out and make a statement. And that’s what this is all about.”

All four teams hope to return to Columbus for the Final Four in April.

“This was a great event,” Ohio State coach Kevin McGuff said. “Columbus is going to be a great place for the Final Four and I think a lot of people know more about it at this point, but this is a community that really supports women’s athletics and so I believe we get to the end of the year, this is going to be a great environment for the Final Four.”

The top four teams in the poll — UConn, Texas, Baylor and South Carolina — went 5-0 winning by an average of nearly 47 points.

With the start of the season, plenty of transfers got a chance to get their first action with new teams. Azura Stevens had eight points and eight rebounds for the Huskies while Jessica Shephard helped Notre Dame to a rout of Mount St. Mary’s with 18 points and 11 rebounds.

Other things that happened this week:

RETIRING JERSEYS: Kayla McBride (Notre Dame), Courtney Paris (Oklahoma) and Sylvia Fowles (LSU) all were honored at their alma maters over the weekend. McBride was enshrined in the Irish’s Ring of Honor while Paris and Fowles both had their jerseys retired.

GROWING PAINS: Stanford coach Tara VanDerveer wanted to test her young team early. The Cardinal faced No. 5 Ohio State on Friday and then UConn on Sunday. They lost both games, but the Hall of Fame coach has faith her team has a bright future in front of them.

“Our young players are going to improve. I have a lot of confidence in them. We’re going to enjoy the journey,” VanDerveer said. “It’s a big uphill climb to play at this level, but I know our team will accept it.”

RINGS AND THINGS: South Carolina celebrated its NCAA title one final time with a banner unveiling before the tipoff Friday night. The Gamecocks also received their SEC championship rings. The team was given their NCAA championship ones at a football game before the season started.

MILESTONES: Oregon’s Sabrina Ionescu picked up where she left off last season, recording her fifth career triple-double on Sunday. The Ducks’ sophomore guard had 29 points, 11 assists and 10 rebounds in a win over Drake. Ionescu is now one triple-double short of the Pac-12 career record set by Nicole Powell (2001-04) and two away from the NCAA mark of seven by Suzie McConnell (Penn State, 1985-88) and Louella Tomlinson (St. Mary’s, California, 2008-11). … Columbia senior Camille Zimmerman broke the school’s all-time scoring record, passing Ula Lysniak’s record that had stood for 31 year. Zimmerman has 1,453 points, six more than Lysniak had.