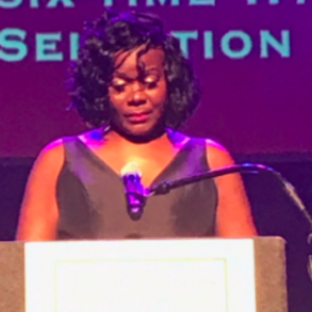 KNOXVILLE, Tenn. — Sheryl Swoopes fought back tears as she read a poem to her late mother while accepting induction into the Women’s Basketball Hall of Fame.

Swoopes acknowledged Saturday that the honor felt “bittersweet” because her mother wasn’t with her. Swoopes’ mom, Ida Louise Swoopes, died of colon cancer on March 14.

“Although she’s not physically here with us, I know she’s here in spirit and will forever live on in my heart,” Swoopes said.

As she closed her induction speech, Swoopes read from a poem that ended with the line, “God took you home to prove to us he only takes the best.”

Swoopes knew this would be an emotional moment for her because of her mom’s absence. Swoopes said she intentionally wore a dress with pockets to hold the tissues that she’d need later in her speech.

Swoopes later handed over part of her tissue to Wolters, who tearfully thanked her own mother who also had died. Swoopes and Wolters were teammates on the 2000 U.S. Olympic gold-medal team and on the Houston Comets’ 1999 WNBA championship squad. Swoopes also won gold medals in 1996 and 2004 and was part of Houston’s WNBA championship teams in 1997, 1998, 1999 and 2000 — each of the league’s first four seasons.

Wolters credited Connecticut coach Geno Auriemma for taking a chance on her when other people said she wasn’t fast or athletic enough to succeed.

“I had schools that didn’t want me, that thought I was too much of a project,” Wolters said. “I loved playing them, actually.”

Wolters, a member of Connecticut’s 1995 national championship team, also referenced the UConn-Tennessee rivalry as she returned to Knoxville to enter the Hall of Fame.

“Normally I break into hives when I come to Knoxville, but I made an exception this time,” Wolters quipped. “It was funny because my kids said, ‘Mommy, the people in Tennessee are so nice.’ I laughed and thought… if they could have only seen them all booing me at Thompson-Boling Arena, you wouldn’t think they were so nice, kids.”

Touring the @WBHOF with Kara Wolters and look what we found! pic.twitter.com/sEaaE9R1GX

In Swoopes and Wolters, Saturday’s ceremony featured two of the 10 players who have won an NCAA title, WNBA championship, Olympic gold medal and FIBA Women’s World Cup championship in their careers. Swoopes led Texas Tech to the 1993 national title.

Bell worked 15 Final Fours while officiating for over 30 years. Grant was a founding member of the Association for Intercollegiate Athletics for Women and dedicated her selection to everyone who assisted in building that organization.

“I truly believe Title IX would not have survived the 1970s if the AIAW had not been in existence,” said Grant, who was the Iowa women’s athletic director from 1973-2000. “Title IX would have been lost.”

The Delta State teams that won three straight AIAW national championships from 1975-77 also were recognized Saturday night as “trailblazers of the game.”

A video honoring former Tennessee coach Pat Summitt aired at the start of the ceremony and was followed by a standing ovation. Summitt died last June after battling early-onset dementia, Alzheimer’s type.

Insell thanked Summitt in his induction speech and noted a call she made to Middle Tennessee officials recommending him for that coaching position. Wolters remembered how Summitt singled her out and praised her for how she handled her responsibilities as a role player on the 2000 U.S. Olympic team.

Summitt was a founding board member of the Women’s Basketball Hall of Fame and played a major role in bringing it to Knoxville. The Hall of Fame’s south rotunda was named after Summitt two years ago.

“Without Pat, we would not have a Women’s Basketball Hall of Fame,” said television analyst and former North Carolina State player Debbie Antonelli, who hosted the induction ceremony.