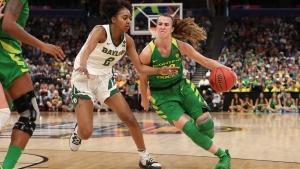 
NEW YORK — Sabrina Ionescu decided to come back for her senior season at Oregon instead of heading to the WNBA.

SABRINA IONESCU TRACKER: Where we left off with the Oregon star, what to expect in 2019-20

Ionescu has 18 triple-doubles in her career and is poised to add more for the No. 1 team in the country, which lost to Cox and Baylor in the Final Four last season.

Ducks coach Kelly Graves said he has seen a new determination from his star guard this fall, but also the ability to relax and enjoy her final college season.

“I’ve seen tremendous focus, but also I’ve seen a young lady having some fun,” Graves said. “I don’t think she put a burden on herself or anyone else. I think she’s been a lot of fun this fall. She’s having a great time.”

Cox averaged 13 points, 8.3 rebounds and 2.6 blocks last season as a junior in helping the Lady Bears win the national championship. The 6-4 post was having an incredible evening in the title game before going down with a knee injury. She is back to 100% for the start of this season.

“Lauren Cox is the epitome of what a student-athlete should be, academically one of the finest students that Baylor has ever had. On the floor she’s one of the most talented players we’ve ever had in our program,” Baylor coach Kim Mulkey said.

Mompremier had a great year for the Hurricanes, averaging a double-double with 16.7 points and 12.2 rebounds. She was part of USA Basketball’s training camp in Florida last month and really uses 6-4 frame well.

“She’s worked very hard and I think that she has really expanded her game to where she can play at every spot on the floor,” Miami coach Katie Meier said. “Her versatility makes her one of the top players in the country so I think this honor is well-deserved.”

Carter was one of the most dynamic scorers in college basketball last season averaging 23.3 points. She went over the 40-point mark three times in the regular season and came close many other times. She had 35 points in the Aggies’ season-ending loss to Notre Dame in the Sweet 16. The 5-7 guard is the only junior on the All-America team.

“She’s playing as good of basketball as she’s ever had going into the year. This is a young lady who has lived up to her hype in high school, USA Basketball, and her first two years in college,” Texas A&M coach Gary Blair said.

“The ability to have potential is something, but to continue to keep living up to it every night, in USA Basketball and in the SEC — it’s hard to stay at the top. That’s what she lives for. She loves to compete against the best to be one of the best, she lives for the moment. The preseason hype is good for all of us, but I’m more concerned about earning awards in the postseason.”

Maryland senior Kaila Charles is a huge reason the Terrapins have high expectations this year and are No. 4 in the preseason poll. She averaged 17 points, 6.7 rebounds and 2.3 assists last season and is the Big Ten preseason player of the year.

“Kaila Charles has been a leader since she stepped on campus. She’s a matchup nightmare,” Maryland coach Brenda Frese said. “Kaila has led this team through the battles and she’s a relentless competitor every night on her floor.”

Charles is Maryland’s first preseason All-American since Alyssa Thomas in 2013-14.

Ionescu and Cox are the only two returners from last spring’s All-America teams. Oregon’s guard was on the first team while Baylor’s post was on the third team.

The AP started choosing a preseason All-America team before the 1994-95 season and this is only the second time that the team didn’t have a player from UConn, Tennessee or Notre Dame on it. The 2005-06 squad was the only other time that happened.