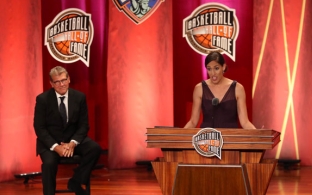 Women's basketball: Rebecca Lobo owns the stage as she enters Hall Of Fame

Rebecca Lobo took her place on the stage and turned to her Naismith Memorial Basketball Hall of Fame presenter.

Geno Auriemma was seated nearby on the stage.

“I thought you only sat on the throne?” Lobo said.

And so began the induction speech from the UConn basketball icon. The woman who makes her living analyzing basketball for ESPN was funny and poignant, composed and eloquent.

And did we mention she was funny?

Lobo, the 10th of 11 inductees honored Friday night at Springfield Symphony Hall, was greeted with the loudest ovation of the night. She grew up 15 miles away in Southwick, Mass., she played collegiately in Connecticut and still lives not far from the Hall of Fame.

So she was very much the hometown favorite. And with her college coach, a 2006 inductee, seated nearby, Lobo began her speech in her hometown and ended back with Auriemma.

She talked about the town that helped raise her before thanking her parents, pointing to her father Dennis in the audience. She mentioned her brother Jason, who played basketball at Dartmouth and is now a judge in Connecticut.

RELATED: Players, peers show support for Bill Self at Hall of Fame induction

“We like to say that his college career prepared him well to … sit on the bench,” Lobo said.

She talked about playing high school basketball with her sister Rachel in the late 1980s, when both had “big hair, the exact same hairstyle as Eddie Van Halen.”

“Perhaps because of that distraction, I scored a lot of points in high school,” Lobo said. “Half of them were on assists from her.”

Then it was on to UConn. Lobo said she chose UConn because she wanted to play for Auriemma and Chris Dailey.

“It was the best basketball decision of my life,” Lobo said. “Now when I work games, whether I’m in an arena calling a game or in studio, I get texts from Chris Dailey for almost every game. And about 50 percent of the time, the text just says, ‘I just pressed mute.’

Some great photos from a very special night at the @Hoophall. Congrats @RebeccaLobo!

“So CD, who is here, you can’t press mute tonight. Thank you so much for the role you have had in getting me here and the role you’ve had in my life.”

Lobo made reference to her senior year at UConn, when the unbeaten Huskies won the 1995 national title, calling it one of the most magical seasons in the history of women’s college basketball. She mentioned Jamelle Elliott, Pam Webber, Kara Wolters, Carla Berube and Nykesha Sales

Another UConn teammate, Jennifer Rizzotti, was at Symphony Hall.

“She is one of my best friends and best teammates,” Lobo said.

Lobo talked about her move to the WNBA’s New York Liberty. Playing professionally was a childhood dream, and Lobo said she wrote a letter to Red Auerbach as a sixth-grader. She told Red she would be the first girl to play for the Boston Celtics.

But she played in the WNBA, setting the league on a path of growth. Lobo said she now sees her oldest daughter light up when she talks about Breanna Stewart or her 11-year-old wear a Tina Charles jersey.

Lobo’s husband Steve Rushin and her four children were a focal point of her speech. She told the story of her husband watching the UConn men’s team playing in the NCAA Tournament years ago when Lobo’s then-5-year-old daughter came into the room, looked at the TV and asked if the boys were playing basketball.

Rushin said they were.

“I didn’t know boys played basketball, too,” she said.

That drew applause from the audience. There were laughs when she told the story about texting Rushin with the news that she was selected for induction. She texted, “Tonight you get to sleep next to a Naismith Hall of Famer.”

The video screen, of course, immediately had a shot of Bird. And Lobo assured Bird that Rushin must stay at least 15 feet away.

Lobo told her kids she was so proud of them, “mostly for behaving tonight. … It’s a long night.”

She talked about coaching her kids. She thanked ESPN for giving her an opportunity to work in TV, even though “no one tells you how to do it … except for everybody on Twitter.”

Finally, she thanked her mother RuthAnn, who died in 2011, for advocating for her and guiding her as she began to play sports.

“No one would have appreciated this Hall of Fame honor more than my mother,” she said. “I love you mom.”

And as the speech ended, Lobo returned to Auriemma. She said that when he recruited her, Auriemma told her she belonged at UConn.

Pretty awesome. But this happened during the ceremony. Time to get Silly Putty out of a little girl’s dress. pic.twitter.com/XE3o87Dbsr

Rowe was shown on the video screen as his award was announced Friday. “He helped transform the University of Connecticut into one of the most dominating basketball programs in the country,” host Ahmad Rashad said.

Earlier in the ceremony, Notre Dame coach Muffet McGraw was inducted. McGraw, presented by legendary Hall of Famer Ann Meyers, took her place on the stage in front of a curtain that featured team and school logos representing the inductees.

McGraw immediately made reference to a UConn Husky logo.

“I wasn’t nervous enough,” she said. “But with this Husky behind me …”

This article is written by Paul Doyle from The Hartford Courant and was legally licensed via the Tribune Content Agency through the NewsCred publisher network. Please direct all licensing questions to legal@newscred.com.