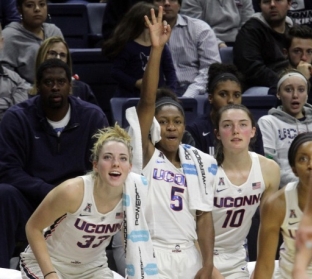 NEW YORK — The UConn Huskies continue their run at No. 1 in The Associated Press women’s basketball poll.

The Huskies (1-0) routed then-No. 10 Stanford in the season opener on Sunday. UConn once again received all 32 votes from the national media panel on Monday.

UConn was followed by Texas, Baylor and South Carolina.

The top four teams in the poll went 5-0 winning by an average of nearly 47 points.

Louisville moved up four spots to fifth after beating Ohio State 95-90 in overtime on Sunday. Notre Dame, Mississippi State, UCLA, the Buckeyes and Oregon round out the first 10 teams in the poll.

Stanford dropped to 14th after losing to Ohio State and UConn.

Kentucky moved in at No. 25 while DePaul fell out.

Here are a few other tidbits from this week’s poll.

DUCKS FLY HIGH: Oregon cracked the top 10 for the first time since the school was also ranked 10th on Dec. 4, 2000. Oregon (2-0) heads to No. 19 Texas A&M to play in the semifinals of the preseason WNIT on Thursday.

UConn leads the charge after a wild first weekend of #NCAAW hoops.

CONFERENCE SUPREMECY: With Kentucky entering the poll, the SEC now has six teams in the Top 25, giving the conference one more then the Pac-12.

CHALLENGING SCHEDULE: Maryland coach Brenda Frese is throwing her young team right to the fire with games against No. 4 South Carolina and UConn this week. The Terrapins aren’t the only team with a tough early season matchup. The fifth-ranked Irish visit Western Kentucky, who upset then-No. 16 Missouri in the season opener. Notre Dame then flies west to face No. 19 Oregon State on Sunday.

Share. Twitter Facebook Google+ Pinterest LinkedIn Tumblr Email
Previous ArticleCollege basketball predictions: Scores, games to watch this week
Next Article Kentucky vs. Kansas: A look back at the six past meetings between Bill Self and John Calipari