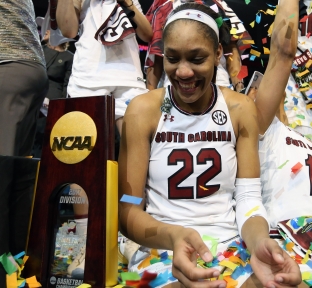 NEW YORK  — It’s been five years since a team other than UConn started the season as defending champions. Coach Dawn Staley and her South Carolina Gamecocks have that honor this year.

After a thrilling Final Four that ended with the Gamecocks winning their first national championship, women’s college basketball is ready to get started Friday.

South Carolina is among the teams looking to travel to Columbus, Ohio, for the Final Four next April. UConn, Stanford, Ohio State and Louisville will make the trip there this weekend to play a tipoff tournament at the site of the upcoming NCAA championship.

South Carolina returns only two starters this season, although one is star A’ja Wilson.

“I think when we first started practice we had a certain level of confidence and swagger,” Staley said. “But that team that won last year and the team that we have this year are very different. I made sure they were aware of that very quickly.”

Mississippi State ended the Huskies’ 111-game winning streak on a last-second shot in overtime of the NCAA semifinal game. With the longest winning streak in NCAA history behind them, UConn will aim for a fifth national championship in the past six seasons.

“I think what happened last season is exactly what needed to happen,” UConn coach Geno Auriemma said. “Not because we need any extra motivation to win. I just think we need it to lift all the stuff we’ve been carrying around with us the last couple of years and just play free and clear and be like everybody else, and understand that losing is not the end of the world.”

The top-ranked Huskies return a talented group led by three preseason AP All-Americans. Auriemma has another group of talented newcomers as well.

Some things to watch this season in women’s basketball:

MILESTONE WATCH: Three coaches have a shot at joining the 1,000 win club this year with Auriemma (991), North Carolina’s Sylvia Hatchell (990) and Rutgers’ C. Vivian Stringer (977) all within reach of that mark. Only Pat Summitt and Tara VanDerveer have reached 1,000 victories in women’s basketball.

“I honestly had no idea I was that close, but that is incredible company to be a part of,” Auriemma said last summer. “The fact that there are three of us within reach of that mark just goes to show we’ve all been in the game for a while.”

South Carolina will try to get Te’a Cooper eligible at semester break. She sat out last season at Tennessee with a knee injury then switched to the Gamecocks this summer.

FRESH FACES: There are a bunch of talented newcomers this season, starting with Tennessee’s highly-regarded freshmen group . The Lady Vols are led by Rennia Davis and Evina Westbrook.

We are just days from the @LadyVol_Hoops home opener vs. ETSU! A Sunday home game = Kids’ Day! Come stop by our Kids’ Corner on the concourse @ Gate F! : https://t.co/YVDvg9vkFB pic.twitter.com/8MIvM7bAI7

“They are very talented young women and I think they came in here as highly touted freshmen,” Lady Vols coach Holly Warlick said. “Some think they have a lot of pressure, but they don’t see it as pressure.”