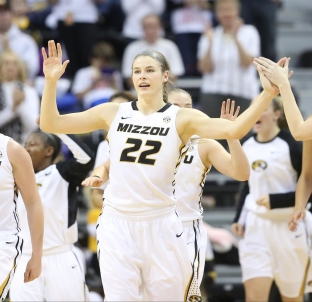 NASHVILLE, Tenn. — Last September, Missouri forward Jordan Frericks’ senior season ended before it could begin after she tore the anterior cruciate ligament in her right knee while going up for a layup in practice.

This season Missouri returns one of its deepest teams in program history and Frericks’ return is a big reason why.

After spending her first two years as a Tiger helping coach Robin Pingeton lay the groundwork for the program’s success, Frericks is healthy and ready to end her career on a high note in year five.

“She’s a tremendous rebounder for us and really efficient for us around the basket,” Pingeton said earlier this year. “To have that back adds a lot more post-up for us.”

Frericks spent last season watching Missouri win 22 games and lose in the second round of the NCAA tournament for the second year in a row. Her return pairs her with junior forward Cierra Porter, giving the Tigers two all-conference caliber players down low.

Texas A&M coach Gary Blair said at the women’s SEC Tipoff last week that Frericks, 6-1, has been a tough guard for his team because of the diversity of her post game.

“Her balance is very good,” he said. “She gets down to the low block. She knows how to score. She’s got more than one move.”

As a junior two seasons ago, Frericks averaged 12.1 points and a team-best 7.7 rebounds on her way to second team all-SEC honors. She’s a traditional post player for Missouri and rarely uses her jump shot.

Frericks said she gained a lot of perspective on her career and on Missouri’s offensive and defensive schemes while she was sidelined.

“I was watching basketball the whole year so there was definitely things I was able to pick up on,” she said. “I watched film myself to stay mentally in it. The perspective of leadership, there’s so much growth that can come from watching the game.”

Frericks said one of her biggest takeaways from watching film was on foul trouble, which is something she’s battled throughout her career. She thinks watching some of the situations that got her there in the first place could help her prevent it the second time around.

While she was injured, Frericks said she also acted as a “behind-the-scenes” leader because she couldn’t do much on the court.

Frericks is close with fellow Missouri forwards Kayla Michael (formerly McDowell) and Bri Porter, who also have torn ACLs. Frericks said having both teammates to challenge her in rehab and pick their brains on the process gave her comfort as she sat out the season.

It also gave Frericks even more respect for Porter, who has torn five ACLs.

“She’s relentless,” she said. “To be able to do that five times, all the credit to her. She’s just a role model in that area to be able to go through that again and again and have the right perspective and mindset.”

Pingeton spent last season and this summer trying to expand Frericks’ game as much as they could because the injury limited the ways in which they could get creative. Frericks it mainly revolved around new post-up moves.

Last week, Pingeton said Frericks is currently at “95 percent” and she has mostly seen the same player before the knee injury.

“She looks powerful,” Pingeton said. “She looks explosive. To me, the biggest challenge right now is probably the timing issue. There’s one thing to go through your rehab and get stationary shots up. But to gain speed shots and on the move that feels a little different, you’ve got to work on the timing of that.

“But other than that, I think she’s looked as good as she’s ever looked.”

This article is written by Alex Schiffer from The Kansas City Star and was legally licensed via the Tribune Content Agency through the NewsCred publisher network. Please direct all licensing questions to legal@newscred.com.