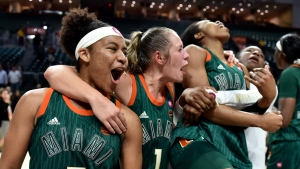 Women's basketball: Miami earns Team of the Week honors after upset of No. 2 Louisville


With a team resume sporting wins over five ranked opponents this season, including two of the top five teams in the country, it’s no longer fair to the Miami (Fla.) Hurricanes to call it an “upset” when they prevail over a top-ranked opponent.

Miami’s latest “upset” came against No. 2 Louisville, 79-73 on Sunday afternoon in front of 12,193 fans at the KFC Yum! Center, when the Hurricanes stormed back from a 14-point deficit to pick up the biggest regular season win in program history.  Behind a game-best and season-high-tying 25 points from senior forward/center Emese Hof, Miami (22-5, 10-2 Atlantic Coast Conference) earned its first-ever top-three win and moved into first place in the ACC.

#20 Miami goes on the road and defeats #2 Louisville, 79-73! pic.twitter.com/JXtOCuGnEJ

Louisville led 68-66 with under four minutes to go before Miami’s defense turned it up a notch, holding the Cardinals to only five points in the final 3:55 of the game, outscoring the Cardinals, 32-22, in the last 10 minutes.  It marked the second-highest single-quarter point total for Miami since the NCAA went to four quarters in 2015-16.  It was also the first time Louisville has allowed 30-plus points in a frame since Notre Dame had 31 on Feb. 7, 2017 and the most it has conceded since Dayton had 33 on Nov. 29, 2015.

Hof achieved her team-high ninth 20-point showing of the year and set career highs in ACC play in points (25), made field goals (10) and assists (five), finishing 10-of-16 from the floor. She tied her season and ACC bests with three steals, as well as pulled down a co-team-high seven rebounds and committed zero turnovers. She totaled 18 points on 7-of-10 shooting in the second half, including 12 on 4-of-5 shooting in the fourth quarter.  Miami shot 55.1 percent (27-of-49) from the floor, including 75.0 percent (6-of-8) from long range. The former was its fourth-best clip of the year and the latter ranked first.

With Sunday’s triumph, the Hurricanes are now 5-1 against ranked teams this season and have double-digit ACC wins for the seventh time in nine years and the fourth in a row.  Miami’s five ranked wins this season have come over Louisville, Notre Dame, Iowa State, Marquette and Syracuse, with a lone defeat at the hands of Florida State on Jan. 31.  Miami has moved up to No. 14 in The Associated Press’ women’s college basketball poll released on Monday.

Upset central!@CanesWBB have upset Louisville, Notre Dame, Syracuse, and Marquette…who’s next on their list? 💪#ncaaWhttps://t.co/0aZ66TSjeh

Winners of four straight games in ACC play, Miami will continue its road trip this week, playing a third consecutive road game at Virginia Tech on Thursday night in Blacksburg, Va.  The Hurricanes will then be looking to avenge the earlier season loss to Florida State when they host the Seminoles on Sunday, Feb. 24 in Coral Gables, Fla.