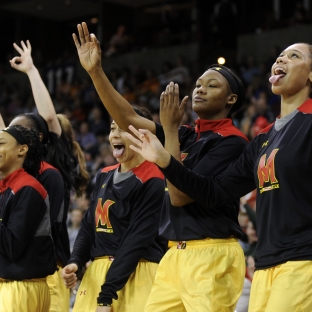 When the Maryland women’s basketball players first saw their new jerseys — the ones they’ll wear later this month in Taipei, Taiwan, with “USA” emblazoned across the front — they turned to Snapchat.

Their gear for the World University Games, where the Terps will be the second college program to be invited in place of what’s often a hand-picked all-star squad, was too cool not to share.

And it served as a reminder, senior guard Kristen Confroy said, that the the team’s summer of constant practice, adapting to international rules, court configurations and a new-look lineup after losing last year’s top three scorers would be worth it.

Confroy, along with forward Brianna Fraser and guard Kaila Charles, modeled their new threads Wednesday morning after talking about their excitement for the program’s second international trip in as many years, joking about the struggle of learning Mandarin and their anticipation for the 15-hour flight.

“Obviously, it’s been a tough summer, a grueling summer,” Confroy said. “We’ve been working really hard, so to see, ‘OK this is what we’re working for,’ it’s bigger than us. And now getting the opportunity to wear it across our chest, it’s just phenomenal, and we can’t wait to get there.”

After scheduling friendlies against Taipei and Australia the weekend before the tournament, the Terps open the event Aug. 21 against Uganda and will play two more pool games before the quarterfinals on Aug. 25, the semifinals on Aug. 26 and the medal rounds on Aug. 28.

With all her players in Xfinity Center each day to prepare for the two-week trip, coach Brenda Frese said this offseason has been “unlike any summer we’ve ever had.”

The NCAA mandates practice restrictions, but the international assignment allowed Maryland unlimited time with coaches on the court.

That, the Terps said, has been instrumental in adapting to International Basketball Federation rules.

They’ve learned to play faster. FIBA regulations require the offense to push the ball up the court before the eight-second violation — it’s 10 seconds in the NCAA — and the shot clock resets to 14 seconds after an offensive rebound.

RELATED: Women’s basketball moves to 4-foot arc in the lane

The players have adjusted their spacing, too.

Coaches stuck white tape throughout the court to mimic the layout the Terps will find overseas. The 3-point line is more than a foot farther from the basket, while the lane is about 4 inches wider.

Early on, the players grappled with the new dynamics. They looked down to make sure they weren’t committing a lane violation or attempting a 3-pointer from inside the arc, which made ball movement and communication difficult through the shorter possessions.

“But our teammates,” Fraser said, “if they’re on the sideline, they’d tell us like, ‘Bri, you’re in the lane. You need to get out.'”

Gone are last year’s star seniors in guard Shatori Walker-Kimbrough and forward Brionna Jones (Aberdeen), who each averaged more than 18 points per game in the Terps’ run to the Sweet 16, and National Freshman of the Year Destiny Slocum, the budding point guard who transferred to Oregon State in the offseason.

Frese, however, is pleased with the efforts from “players that have patiently been waiting their turn.”

Confroy has become more dynamic driving to the basket. Fraser is aggressive on the boards. Charles, Frese said, has taken an “alpha dog” role with vocal leadership and encouragement after starting all 35 games as a freshman last season.

Plus, Frese said four-star point guard Channise Lewis, the Terps’ lone rookie, has “taken the reins” during the team sessions she otherwise would’ve had to wait until preseason to join.

“Who’s going to be our go-to scorer? Who’s going to be someone who gets great stops on the defensive end for us?” Frese wondered. “We’re going to learn a ton about our team, which will prepare us for the upcoming season.”

Maryland had a similar opportunity last summer, traveling to Italy for two games in eight days.

But that excursion didn’t bring the pressure of trying to earn the United States’ record 10th gold medal in the World University Games. UNC Charlotte, the other full NCAA women’s program to represent the U.S. in the event, finished sixth in 2007.

Instead, the Terps explored Italian cities while playing in their usual Maryland jerseys. This time, they’ll be staying in the athletes village and promoting the U.S. on their gear.

“Our trip to Italy was more of a vacation,” Confroy said. “This is more of a business trip.”

This article is written by Callie Caplan from The Baltimore Sun and was legally licensed via the Tribune Content Agency through the NewsCred publisher network. Please direct all licensing questions to legal@newscred.com.