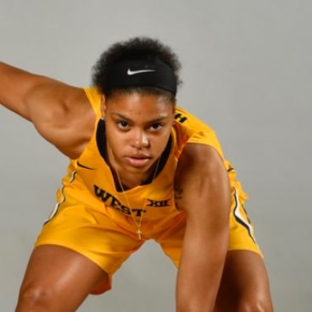 Destiny Harden breaks into a smile when asked about her first name.

“As a kid growing up, I always did a lot of things as far as sports-wise. I was active. I’m just chasing my destiny right now.”

The No. 12 Mountaineers (1-0) hope she catches up to it quickly in her true freshman season.

The 6-footer out of Chicago made her collegiate debut in Friday’s 102-52 thumping of Central Connecticut State, at the Coliseum.

“I would think I did OK in my first college game as a freshman,” said Harden, whose Mountaineers host Sacramento State (0-2), at 7 p.m. today, at the Coliseum. “I was filling in all the spots that I had to fill in and doing what coach (Mike) Carey wanted me to do.”

Carey never questions Harden’s effort on the floor. That’s why he’s so optimistic about her future in a Mountaineers uniform.

“She’s going to be a good player because she does play so hard. She’s got a lot to learn, and she’s learning. She’ll continue to get better. I think people are going to see her get better as the year goes on.”

It didn’t take Harden long to recognize this is not high school or AAU basketball anymore. She has to be more into the game on every level.

Just in case you missed it, we’ll leave this right here… pic.twitter.com/5xIirARWg8

“This is a lot different basically because it’s more organized,” Harden said. “We have to have a lot of energy at all times.

“There’s no time for sitting around, especially on defense. Any time your man can back-door you. You have to always be intense in the game. That’s kind of the big change of high school and AAU to college.”

At times, Carey detects Harden thinking too much instead of letting her instincts take over.

“She’s a big-time athlete,” Carey said. “Sometimes you don’t see that because she’s hesitant in things she does on the floor. Once she starts getting it and understanding what we want her athletic ability will come out.”

MORE: Western Kentucky takes down No. 16 Missouri to open season

That ability manifested itself in her four steals against Central Connecticut State. She is confident her defensive ability will only improve as the season progresses.

“Playing defense for coach Carey is a challenge, but I accept the challenge,” Harden said. “I like challenges. It helps me as a person on and off the court.

“With coach Carey helping me with defense, I think it will motivate me more to want to play harder and want to stop the ball and get steals and rebounds.”

Teammate Kristina King knows Harden doesn’t need much motivation to do any of that.

Destiny Harden on the fast break! She puts WVU up, 16-5, on CCSU with 5:13 to go in the first quarter. pic.twitter.com/d6uTxxPzyR

“She always goes hard no matter what,” said King, the starting power forward who scored 14 points in the opener.

“She just needs to learn the plays and where she needs to be on defense. I feel like she’ll be a good forward for us.”

Off the floor, Harden has settled into life in Morgantown, which bears little resemblance to life in Chicago.

“It’s smaller, more peaceful,” she said. “They accept you as a person. You can get a lot of love here. Leaving Chicago wasn’t as hard. Also, West Virginia is a great basketball school. Coach Carey is a great coach. I feel like I can get the job done here.”

This article is written by Todd Murray from The Dominion Post, Morgantown, W.Va. and was legally licensed via the Tribune Content Agency through the NewsCred publisher network. Please direct all licensing questions to legal@newscred.com.