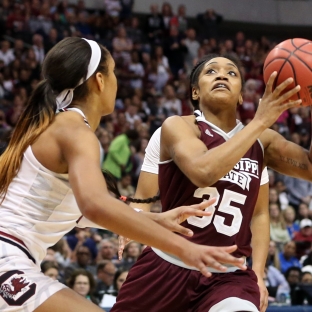 COLORADO SPRINGS, Colo. — Victoria Vivians playfully rolled her eyes when she got to her room the first day of USA Basketball training camp. The Mississippi State star’s roommate for the week was South Carolina’s A’ja Wilson.

“Oh god,” Vivians said laughing on Wednesday. “It is neat that we are teammates here and rivals in the winter.”

The last time these two were on the same court before the Under-23 camp was when Wilson’s Gamecocks beat the Bulldogs in the national championship game this past April. That came two nights after Vivians’ team pulled off the shocker of the NCAA Tournament with a Final Four win over UConn, ending the Huskies’ 111-game winning streak.

“It’s crazy. A few months from now we’ll probably hate each other’s guts, but when we get off the court we’ll be friends,” Wilson said. “Now we’re all wearing USA jerseys.”

Wilson said that she hasn’t brought up the championship win to Vivians, but has it in her back pocket if Vivians’ team in the USA camp beats her squad.

Vivians just wants to beat Wilson once. She has never beaten South Carolina in her entire career at Mississippi State. She’ll have a few more chances in the upcoming season.

They aren’t the only SEC players in the camp. Vivians’ teammate Teaira McCowan is in Colorado as well as Tennessee seniors Mercedes Russell and Jaime Nared. Vivians and Nared are on the same team in the camp.

“It’s cool playing with people that you play against during the year,” Nared said. “That’s part of the joy of USA Basketball, giving you the chance to be teammates with rivals.”

The training camp also has also been an opportunity for some of the coaches to coach players in their conference. UCLA coach Cori Close has Oregon’s Sabrina Ionescu on her team.

Check in on the USA Women’s U23 National Team training camp with a few highlights. #USABWU23 pic.twitter.com/YHBqC8sMBW

“Anyone who loves the game of basketball loves that opportunity. As much as we have a rivalry with Sabrina Ionescu, I’ve known her since she was in seventh grade and recruited her. There’s a lot of respect there. You want to coach great players. I’m always going to be biased to my own kids. But it’s an honor and privilege to coach them.”

There are nine Pac-12 players in the camp and they have enjoyed playing with each other for a few days instead of against each other.

“It’s definitely cool playing with people I compete against during the year,” Ionescu said.