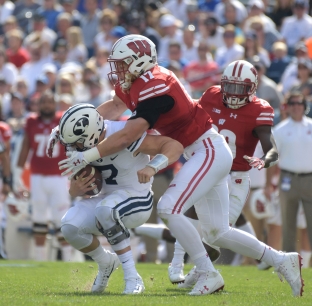 MADISON, Wis. — No. 10 Wisconsin is back from a bye week, rested after a nonconference schedule that provided few tests, especially on defense.

That should change with the Big Ten opener this weekend against Northwestern.

Wisconsin also ranks in a tie for fourth nationally in scoring defense, allowing 10.0 points per game and has yet to allow a point in the second half of a game this season.

“We do a good job of cleaning things up at halftime and everyone settling down, and we move forward from there,” linebacker T.J. Edwards said.

The Badgers have also limited big plays, having allowed just seven plays of 20-plus yards, which is tied for the fifth-fewest in the FBS.

MORE: A 6-step guide to the 2017 College Football Playoff

“We haven’t played our best game yet and we know it,” he said. “We’ll see if we can execute going into the Big Ten. It will be a good test for us.”

That begins with Northwestern, which has proven to be a formidable foe for the Badgers. The Wildcats have won six of the last 11 games and two of the last three between the teams.

RELATED: How teams can lose at home and still win a national title

“They’re tough and they’re physical. They try to match our intensity and physicality. They’ll come out and hit you. They’re not afraid,” senior tight end Troy Fumagalli said. “They always play us tough.”

Wisconsin prevailed 21-7 in Evanston last year, but Northwestern escaped with a 13-7 victory in their last appearance at Camp Randall Stadium two years ago.

I don’t know about you, but we have a game again this week AND we’re back at home.

Edwards said the familiarity of conference opponents, though, does make preparation easier compared to non-conference play.

“It’s nice to be able to go back and look at the past couple of years’ film, especially if a team uses the same type of scheme,” said Edwards, who has a team-high two interceptions.

“But you have to bring more physicality to practice because it’s Big Ten football. Teams are going to be more physical, and we have to match it.”

This article was written by Dennis Semrau from The Associated Press and was legally licensed through the NewsCred publisher network. Please direct all licensing questions to legal@newscred.com.