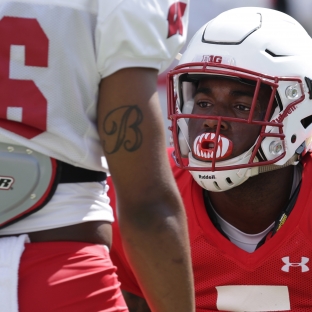 The University of Wisconsin held its final open practice of the fall Saturday, meaning the media and everyone else outside of the program won’t get another look at the Badgers until they open the season against Utah State on Sept. 1 at Camp Randall Stadium.

There’s still some unanswered questions and plenty to speculate about over the next few weeks, but UW’s first 13 practices also revealed a wealth of nuggets about how the team may line up or fare this year.

Here are 10 things we learned from fall camp:

The Badgers divulged this change during local media day after experimenting with the All-Big Ten center at tackle during the last week of spring practice. It appears this position change will stick, as UW has had a clear starting five of Deiter (LT), Jon Dietzen (LG), Tyler Biadasz (C), Beau Benzschawel (RG) and David Edwards (RT) throughout camp.

2. Jack Cichy’s season — and possibly his UW career — is over

This has been the biggest news of camp thus far, but why start with a bummer? Cichy tore his ACL on Tuesday and had surgery Friday. The Badgers are deep at inside linebacker, however, with T.J. Edwards, Chris Orr and Ryan Connelly still around.

3. Chris James and Bradrick Shaw continue to battle for the starting running back job

Running backs coach John Settle seemed to indicate last week that James was leading this race, but we won’t know for sure until game week. Regardless of which guy takes the first snap against Utah State, they’ll both likely carry a heavy workload this season and be productive with it.

4. The No. 3 cornerback spot remains undecided

Redshirt freshman Dontye Carriere-Williams continues to split first-team reps with senior Lubern Figaro in nickel packages. While he hasn’t played a down yet, the coaching staff likes Carriere-Williams and nearly burned his redshirt last year. The youngster may be the favorite to win this job, but he hasn’t appeared to pull away yet.

5. The No. 2 quarterback spot remains undecided

This may be UW’s biggest concern. While both Jack Coan and Kare Lyles have shown improvement since spring ball, neither’s play has injected a ton of confidence that they could lead the offense effectively and consistently. If starter Alex Hornibrook suffers an injury, either Coan or Lyles will need to be ready.

6. Isaiahh Loudermilk will likely break into the defensive line rotation

The 6-foot-7, 306-pound redshirt freshman has impressed defensive line coach Inoke Breckterfield this offseason, leading to a sprinkle of first-team reps for Loudermilk throughout camp. He’ll still play behind seniors Conor Sheehy, Alec James and Chikwe Obasih at defensive end, but Loudermilk may be too productive to keep off the field completely.

7. UW could switch up its return men

The Badgers’ primary kickoff returner (Natrell Jamerson) and punt returner (Jazz Peavy) from last year are both back, but UW could switch things up. Transfer cornerback Nick Nelson, who returned punts at Hawaii, could be a threat in that area, while James and sophomore wide receiver A.J. Taylor have taken the bulk of kickoff return reps.

8. Leon Jacobs could be in for a big year

The fifth-year senior returned to outside linebacker, the position he began his UW career at, this spring, and he’s dominated many of the one-on-one pass rushing drills during fall camp. After Vince Biegel and T.J. Watt’s departure to the NFL, the Badgers need someone like Jacobs to step up at outside linebacker in a big way. Fifth-year senior Garret Dooley could also shine on the other side.

Olive Sagapolu looks the part, but he’s far from a typical defensive lineman.https://t.co/wiTQRxYbTm

9. Garrett Rand will play nose tackle after all

After working at defensive end this spring, Rand moved back to nose tackle and has solidified his spot as the No. 2 man behind starter Olive Sagapolu. With a lack of depth at nose, Rand could become a vital piece of UW’s defense if Sagapolu suffers an injury, although the Badgers could still opt to move Sheehy over from defensive end.

10. The wide receiver group could be deeper than anticipated

If UW’s wide receivers can get healthy in the next few weeks, the group’s talents could be a catalyst for more explosive plays this season. Sophomore Quintez Cephus is on the shortlist of breakout candidates, while sophomore A.J. Taylor and redshirt freshman Kendric Pryor have also both impressed. Peavy could improve as well in his final year.

This article is written by Jason Galloway from The Wisconsin State Journal and was legally licensed via the Tribune Content Agency through the NewsCred publisher network. Please direct all licensing questions to legal@newscred.com.