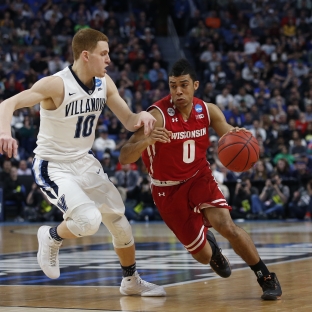 Experience is a relative term these days with the University of Wisconsin men’s basketball team.

So, relatively speaking, sophomore point guard D’Mitrik Trice — with two whole starts on his resume — ranks as a grizzled veteran with the 2017-18 Badgers.

With the departure of four senior starters, including point guard Bronson Koenig, Trice is being counted on expanded leadership duties on and off the court. And after one season as Koenig’s understudy, Trice says he’s ready to meet the challenge.

“I have to make a big jump in my leadership role on this team with a lot of new guys and not that much experience,” Trice said. “But I definitely think I’m taking the right step in the leadership aspect of it. I also believe that I have to be more aggressive on the offensive end than I was last year.”

Trice will have an opportunity to demonstrate his leadership and all-around skills as the Badgers embark on a five-game exhibition tour in New Zealand and Australia.

The time couldn’t be any better for the #Badgers to go halfway around the world.#BadgersDownUnderhttps://t.co/BTBxsJSdCE

The tour will open Tuesday with a game in Auckland against the New Zealand Breakers, featuring former Badgers guard Kirk Penney, the No. 10 scorer in school history and a member of the UW Athletics Hall of Fame.

The Badgers will head to Tauranga, New Zealand for a game against Tauranga City Basketball on Aug. 17 before moving on to Australia, where they will meet Hawthorn Magic on Aug. 19, Melbourne United on Aug. 20 and the Sydney Kings on Aug. 22.

The foreign trip is the first for UW since a 2013 tour of Canada that preceded a season that culminated with a run to the NCAA Final Four.

For now, the goals for this trip are more mundane, focusing on getting a group of young players ready to fill the void left by the departures of program mainstays Koenig, Nigel Hayes, Zak Showalter and Vitto Brown.

Coach Greg Gard is counting on Trice, redshirt sophomore Brevin Pritzl and juniors Khalil Iverson, Charlie Thomas and Alex Illikainen to step up and take advantage of the opportunity for more playing time.

“Even though they weren’t in the spotlight, so to speak, with the four seniors, they got into a lot of game action and very meaningful minutes,” Gard said of last season’s reserves. “They didn’t have the headlines of Hayes or Koenig or Showalter, but they were able to be in the mix and understand what it’s about.”

When Koenig was sidelined by leg issues, Trice started against Michigan and Maryland. That’s two more starts than anybody else besides Ethan Happ, the only returning starter.

Time to get started with the 2017-18 basketball season! #Wisco

Gard said he can tell that Trice has grown from that experience.

“I’ve seen it in the maturity level and the understanding and his willingness to help the younger guys,” Gard said. “Even though he’s a sophomore, he’s kind of in the role of an upperclassman because he got so much experience.”

As long as he can avoid turnovers, Trice will have the freedom to push the ball a little more.

“He can put pressure on the defense in terms of transition,” Gard said. “That’s a strength of his and that’s something we tried to utilize a little bit last year.

RELATED: Kansas prepares for trip to Italy with new-look roster

Trice’s teammates are confident that he will be up to the task and look forward to watching him blossom.

“He’s done an amazing job,” Pritzl said. “He does a great job of picking the spots where he needs to be the scorer and kind of make the plays like Bronson used to.

Happ, who has seen his role grow over the past two seasons, said the key for Trice is to develop more consistency throughout the season.

“I think he’s starting to take that other step as a leader but I also think his game has improved,” Happ said. “He’s gotten to be more consistent as a shooter, which I’m happy about, and he’s finding guys a lot more.

“Early in the season he was doing really well at both of those things but then kind of found average toward the end of the season. If he continues to grow in both of those areas he’s going to be really good for us.”

This article is written by Dennis Punzel from The Wisconsin State Journal and was legally licensed via the Tribune Content Agency through the NewsCred publisher network. Please direct all licensing questions to legal@newscred.com.