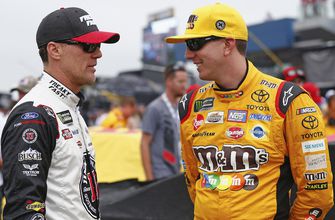 Who will be the front-runners at Kentucky Speedway?

– The numbers don’t lie, and of course, if you look at Kentucky Speedway, the seven trips we’ve been there– yeah, I know Brad Keselowski has won there three times, Kyle Bush has won there twice, and Kyle leads every other category. But when you do look at mile and a half, I tend to look more at what’s going on in 2018.

– I don’t know. Maybe. Maybe that is. I need to get a little bit of that my way, though. Maybe that will be this weekend.

LARRY MCREYNOLDS: What makes Kyle so good on these mile and a halfs this year?

– I don’t know. I mean, Kyle’s obviously a really talented driver on every race track, but they seem to just have it going on on mile and halfs this year everywhere we’ve been, and he’s been the guy we’ve chased at JGR, and especially at those mile and a half tracks.

KAITLYN VINCIE: That certainly has probably helped you having him as a teammate to teach you a couple of things about those mile and a halfs?

ERIK JONES: It does. I mean, we get his information and his data. And having that and his, obviously, advice at our disposal is a pretty big advantage.

– All right, Erik. We’ll see if you can go two for two, back to back wins.