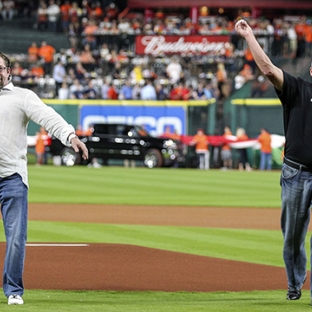 The 2017 Major League Baseball season is in the books and the Houston Astros are the world champions. Former LSU standout Alex Bregman joins a lengthy list of players whom have appeared in both the College World Series and MLB World Series. When you take a look at who has won both, however, the list becomes incredibly shorter.

RELATED: Where did the 2017 Dodgers and Astros go to college?

Let’s take a look at the list of some of the more familiar names to do so.

Roger Clemens is likely the most familiar name that appears on the list. Clemens — who went 13-5 with a 3.04 ERA and 151 strikeouts as a Longhorns sophomore in 1983 — ended his Texas career throwing a nine-strikeout, complete game to defeat Alabama in the College World Series. The Rocket then became one of Major League Baseball’s biggest strikeout artists, still third all-time with 4,672. He reached the World Series in an incredible MVP and Cy Young 1986 season with the Boston Red Sox, but wouldn’t win one until 1999 with the New York Yankees. He added one more win and three more World Series appearances, appearing as a 42-year-old in the 2005 World Series with the Astros.

Ed Sprague has the unique distinction of winning back-to-back championships in both the College World Series and MLB World Series. The third baseman first accomplished the feat with Stanford in 1987 and 1988 where he was a beast in the heart of the lineup, hitting .339 with 22 home runs. In just his second season as a big leaguer in 1992, Sprague appeared in the World Series for the Toronto Blue Jays, where he was sparingly used. Despite only two at-bats, he made the most of them, hitting a game-winning two-run bomb in the ninth inning of Game 2. The Blue Jays returned to the World Series the following season where Sprague earned his second, and final, World Series ring.

Terry Francona has a unique honor of his own. Francona has won both a College World Series and big league World Series, but the latter came as the manager of the Boston Red Sox. Francona not only won the CWS with Arizona in 1980, he took home Most Outstanding Player honors. He was then a central figure of the Red Sox team that reversed the curse and brought a long awaited World Series title back to Boston in 2004. He learned from one of the best. Jerry Kindall won a College World Series as a player in 1956 with Minnesota before winning a few as a skipper with Arizona as Francona’s coach.

Every player, at every level has dreamt of this moment…

The 1965 Arizona State College World Series team graduated a trio of stars that went on to win an MLB World Series. Rick Monday became the first player ever selected in what was a new concept in 1965 known as the MLB Draft. He had to wait until he was 35, but he won his World Series with the 1981 Los Angeles Dodgers. Sal Bando was tied for the most big league World Series won on the list. He put together All Star campaigns as the starting third baseman for the three-time champion Oakland A’s (1972-74). Catcher Duffy Dyer only had one at bat in the World Series, but he was part of the 1969 Miracle Mets. He won his World Series ring with 1967 Arizona State CWS winner Gary Gentry, adding another to the list to accomplish both.

There was also a freshman on the ASU football team that season who would switch sports in 1966 and replace Rick Monday. His name was Reggie Jackson, who of course, would rise to fame as Mr. October.

Jackie Jensen was an outfielder for the first-ever College World Series champions, the 1947 California Golden Bears. He went on to have an All-Star career, nabbing MVP honors with Boston in 1958. But it was in his 1950 season with the New York Yankees that Jensen captured his lone World Series ring. He appeared in just one game and didn’t even register an at bat.

Neither Ryan Theriot nor Mike Fontenot etched out Hall of Fame careers. But they both had lengthy tenures, being able to do a bevy of different things that earned them a spot on World Series rosters. The 2000 CWS champion LSU Tiger teammates both played multiple infield positions and could get a pinch hit when called upon during their big league careers. Theriot won two World Series, one with the 2011 St. Louis Cardinals and the second with the 2012 San Francisco Giants. Fontenot was part of the Giants’ mini-dynasty of sorts as well, winning his ring in 2010.

The best of the rest

The 2005 Houston Astros made a run to the World Series but were then swept in four games by the Chicago White Sox. Roger Clemens, who did make the list, was on that team, but there were a few others as well. Jason Lane (1998 USC) and Mike Lamb (1996 Cal State Fullerton) were also on that roster, as well as Charlton Jimerson (1999 and 2001 Miami) who appeared in one game for MLB’s runner-ups, making them one of the most stacked rosters full of CWS champions of all-time.