Thirty four players have been named the NBA’s Most Valuable player since the first award was given out after the 1955-56 season. We went through all of them to compile a history of the MVPs who played college basketball before beginning their accomplished professional careers.

NBA MVPs like James Harden and Stephen Curry are household names among fans. But these basketball icons attended a diverse, and possibly unexpected, set of schools as former student-athletes back in the day.

“The Beard” took home the former Pac-10 Player of the Year honor in 2009, was named a consensus first-team All-American, made first-team All-Pac-10 twice and has his number retired by Arizona State. He was picked third overall in the 2009 NBA Draft by the Oklahoma City Thunder.

One of the NBA’s most athletic guards played at UCLA before his Oklahoma City Thunder tenure. After starting only one game his freshman year, Westbrook averaged 12.7 points, 4.3 assists, 3.9 rebounds and 1.6 steals his sophomore season.

The Bruins guard was also known for his lockdown defense, winning the Pac-10 Defensive Player of the Year in his second season and steering his team to two straight Final Four appearances.

The Seattle SuperSonics drafted him fourth overall in 2008.

Curry spent three seasons at Davidson from 2006 to 2009 and led Division I basketball in scoring his junior season.

The North Carolina native led Davidson to NCAA tournaments in 2007 and 2008, making the Elite Eight in 2008. 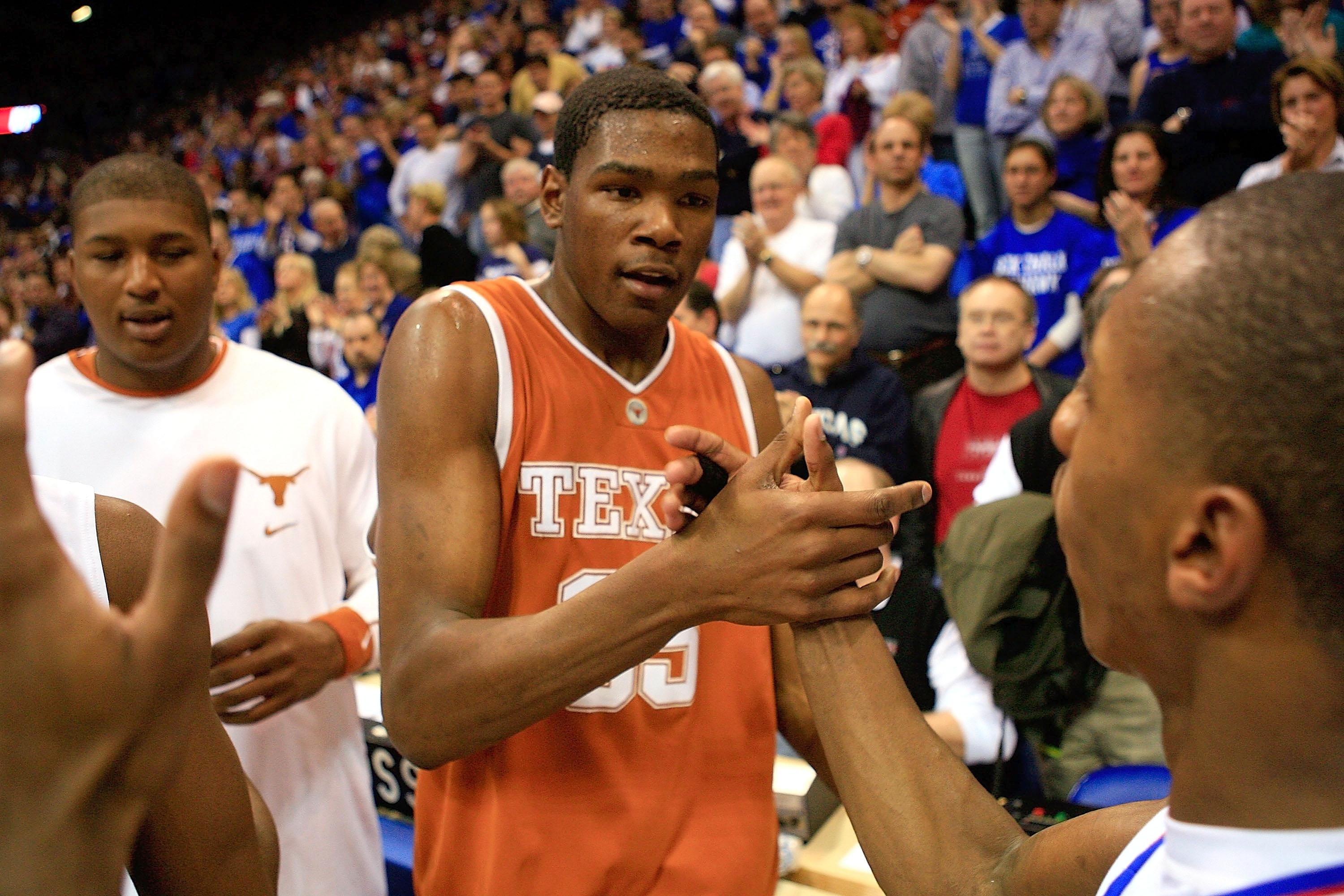 Durant spent one season with the Longhorns and averaged a double-double with 25.8 points and 11.1 rebounds.

Durant was selected second overall by the Seattle SuperSonics in 2007. 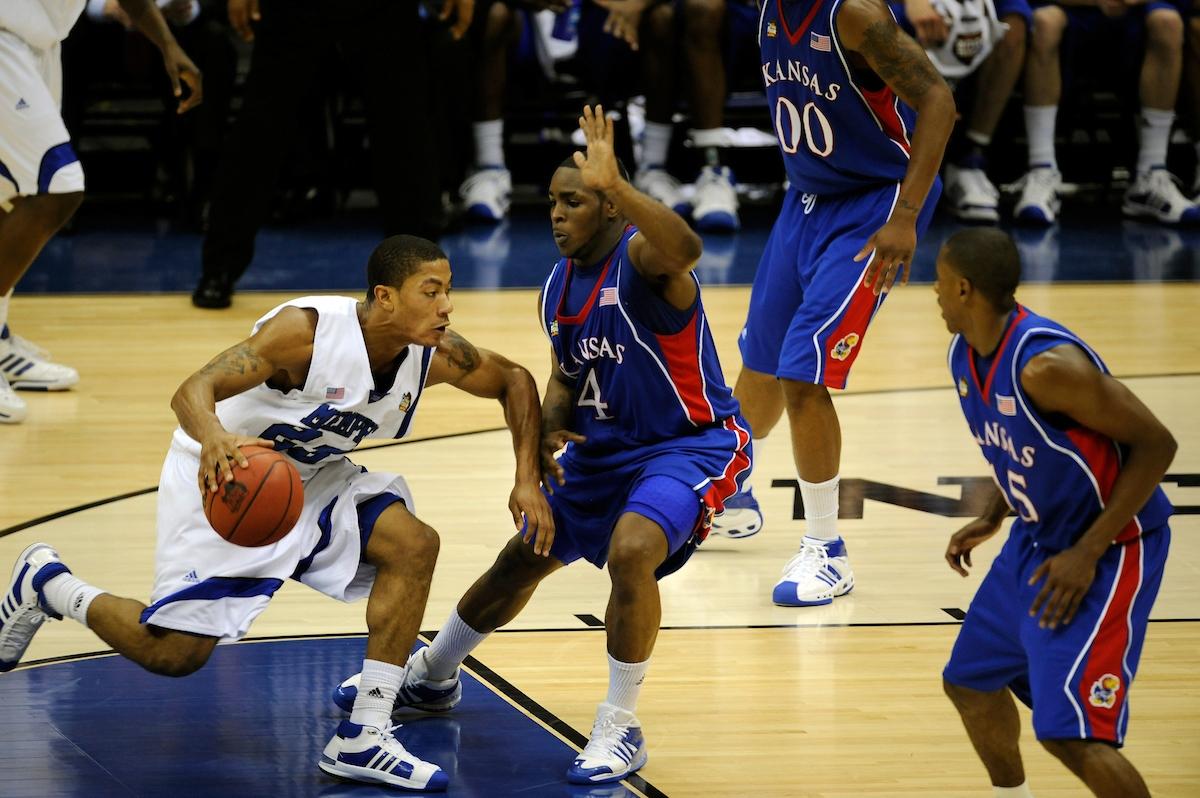 Like Durant, Rose only spent a single season in college. With Memphis during the 2007-08 season, he averaged 14.9 points, 4.5 rebounds and 4.7 assists per game. The Tigers ended up in the NCAA Championship game, but fell to Kansas, 75-68, in overtime (an appearance later vacated).

The former No. 5 high school recruit was drafted No. 1 overall by the Chicago Bulls in 2008.

Virtually unknown as a recruit out of prep school in British Columbia, Nash settled in at Santa Clara. The point guard averaged 14.9 points, 3.1 rebounds and 4.5 assists per game in four collegiate seasons and led his squad to three NCAA tournament appearances.

Nash’s No. 11 was the first retired in Santa Clara’s program history. He was later selected by the Phoenix Suns at No. 15 in the 1996 NBA Draft. 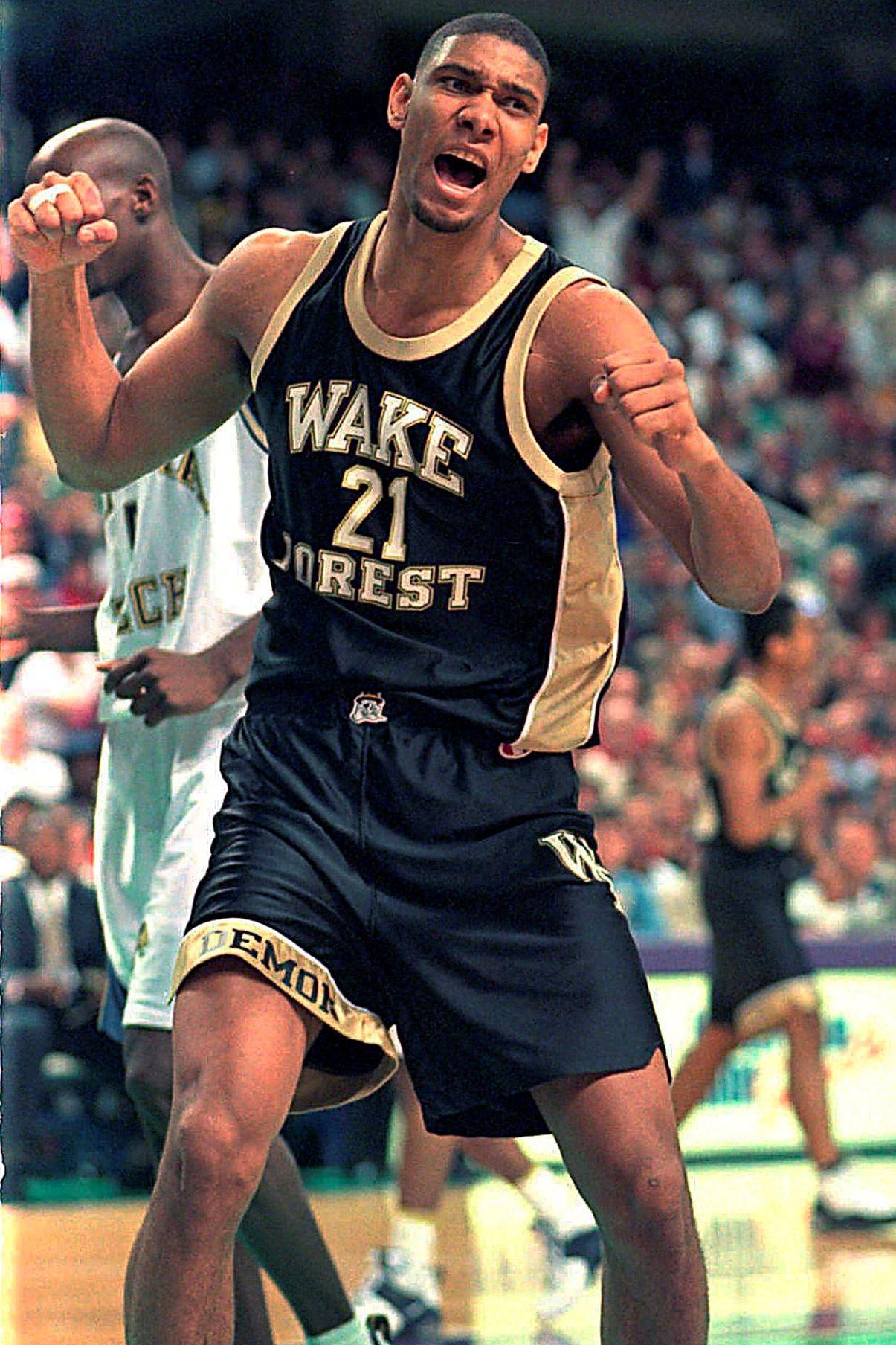 Duncan worked his way to first-team All-American status in 1996 and 1997, adding three NABC Defensive Player of the Year awards to his resume and finishing as the first player in the NCAA to reach 1,500 points, 1,000 rebounds, 400 blocks and 200 assists.

The San Antonio Spurs took him first overall in the 1997 NBA Draft.

Averaging 23 points, 3.6 rebounds and 4.6 assists per game in two seasons at Georgetown, “The Answer” proved to be a masterful scorer. Iverson played in 67 games from 1994 to 1996 and secured consensus first-team All-American honors.

After leading the Hoyas to the Elite Eight his sophomore year, he decided to enter the 1996 NBA Draft, where he was taken first overall by the Philadelphia 76ers.

From 1989 to 1992, O’Neal tormented SEC competition with LSU. As a 7-foot-1 force for the Tigers, he averaged 21.6 points, 13.5 rebounds in a double-double per-game career average over three seasons.

GAMES TO WATCH: The compete schedule of the conference games between the Big Ten and the ACC

He left Baton Rouge as a two-time All-American, two-time SEC Player of the Year, a Rupp Trophy and AP college player of the year honors.

Shaq was a first overall pick in 1992 by the Orlando Magic. 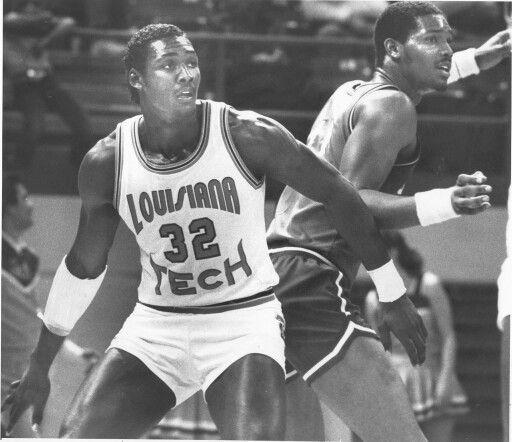 Karl “The Mailman” Malone stayed close to his home in Summerfield, La., by joining the Louisiana Tech Bulldogs. In three seasons (1982-85), he averaged 18.7 points and 9.3 rebounds. The 6-foot-9 forward added a 1983 Southland Player of the Year award and a trip to the 1985 NCAA tournament to his collegiate portfolio.

Malone went thirteenth overall to the Utah Jazz in the 1985 Draft.

Remember the shot that clinched the 1982 NCAA Championship game for North Carolina? The jumper was the crowning moment of Jordan’s college career:

In three seasons with North Carolina, MJ averaged 17.7 points, 5 rebounds and 1.8 assists per game from 1981 to 1984. He was a two-time first-team All-American and took home the 1984 Naismith and Wooden College Player of the Year awards.

SENIOR SEASONS: You won’t want to miss watching these five athletes compete in their final year of college basketball

Jordan was the third overall pick in the 1984 Draft by the Chicago Bulls. 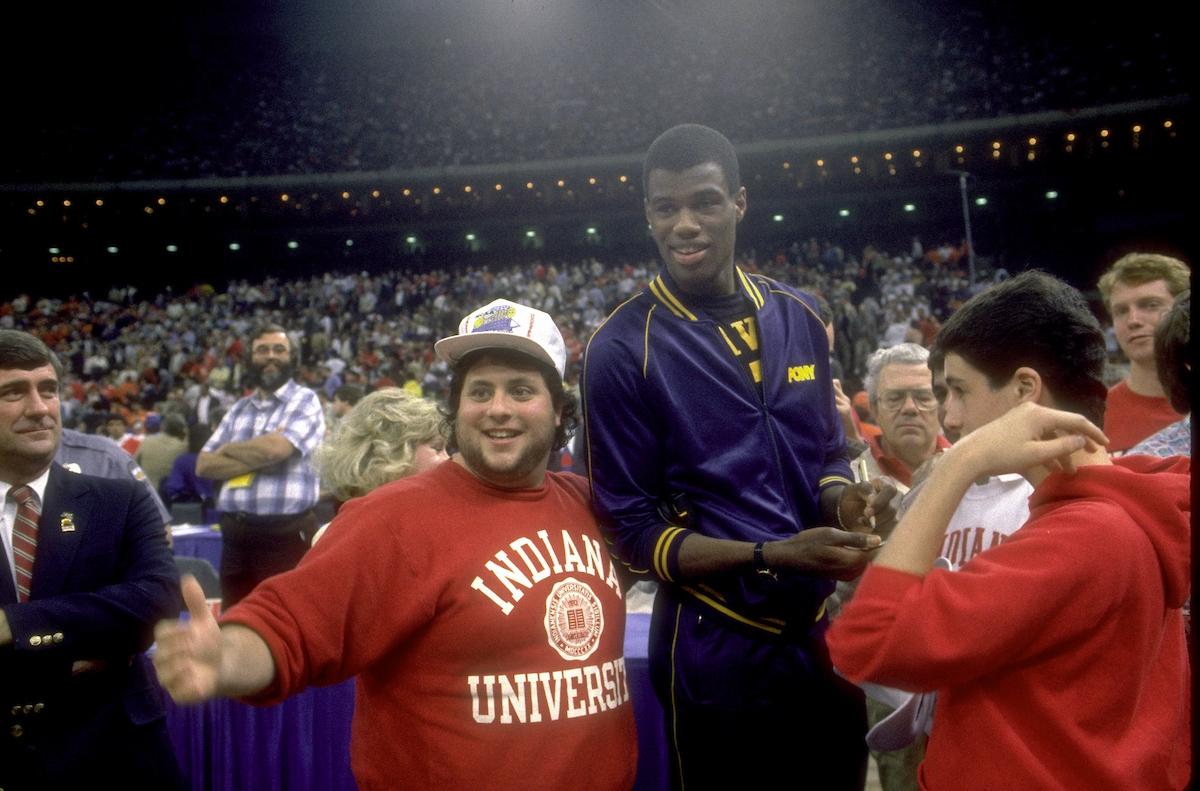 Robinson impressed at Navy and completed two years of active duty after four years of basketball with the Midshipmen. The San Antonio Spurs, who drafted Robinson first overall in 1987, had to wait a couple seasons for him to be eligible to play because of his military obligations.

In his senior season in 1987, “The Admiral” averaged 28.2 points, 11.8 boards, 4.5 blocks and 2.1 steals as a two-way talent on the court. He received the Naismith and Wooden Awards in his final year and was named a two-time All-American at the Naval Academy. 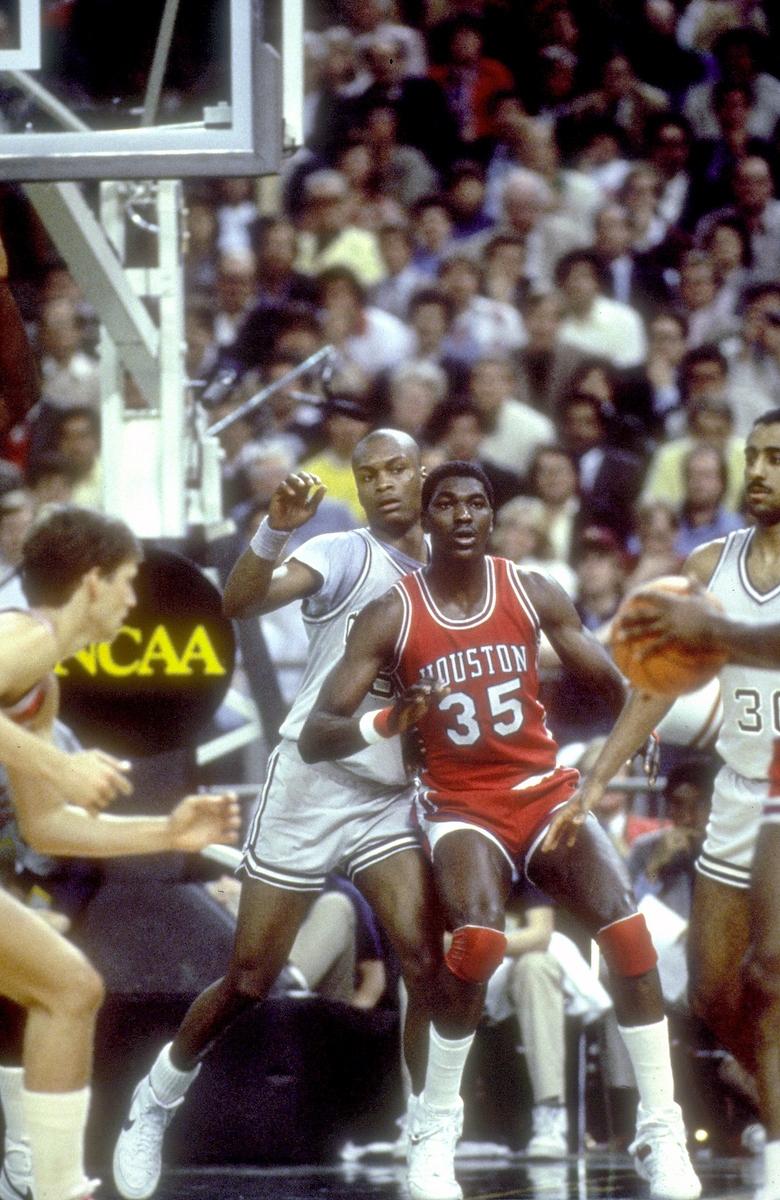 The Cougars center averaged 13.3 points and 10.7 rebounds per game in three seasons from 1981 to 1984. He helped guide his team to consecutive national championship games in 1983 and 1984 as part of the high-flying Phi Slama Jama teams.

He was a first-team All-American in 1984 and was drafted first overall by the Houston Rockets.

Nicknamed “The Round Mound of Rebound” for his large build and athletic skillset, he stood at just 6-foot-6 as a center for Auburn.

But his size was no hindrance in college as Barkley averaged 14.1 points, 9.6 rebounds and 1.6 assists per game for the Tigers from 1981 to 1984. In his third and final season, he was honored as the SEC Player of the Year.

The NBA power forward was drafted fifth overall by the Philadelphia 76ers in 1984. 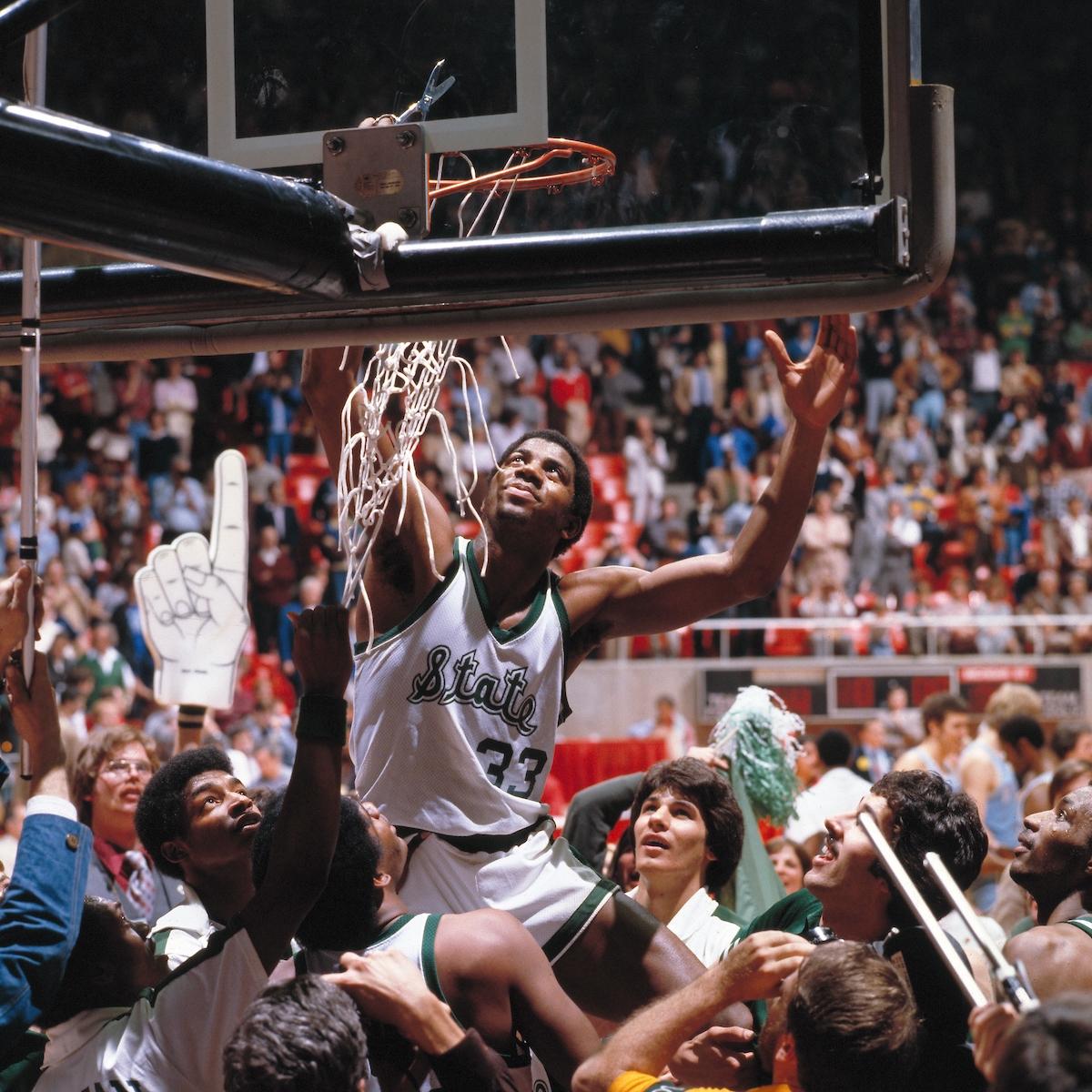 Johnson finished his Michigan State tenure with a championship trophy and a first-team All-American selection after beating Larry Bird and Indiana State in the 1979 national championship game.

BLAST FROM THE PAST: Watch Steph Curry drain 40 points against Gonzaga during the 2008 NCAA tournament

Johnson went first overall in the 1979 NBA Draft to the Los Angeles Lakers. 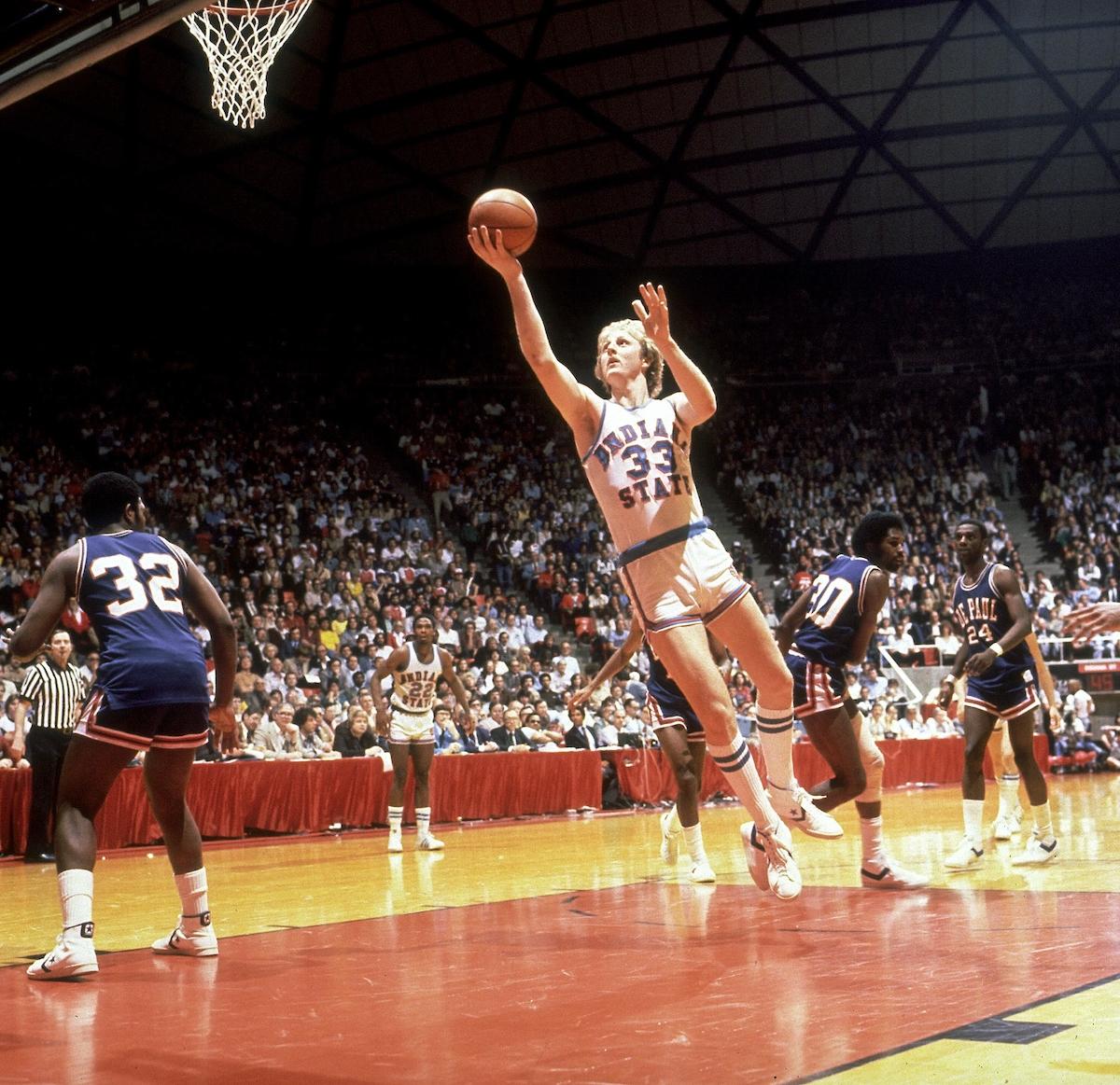 After leading the Sycamores to a 33-0 record and the NCAA title game against Magic Johnson and Michigan State in 1979, Bird was the sixth overall selection in the 1978 Draft by the Boston Celtics.

Dr. J displayed his elite talent while averaging 26.3 points and 20.2 rebounds in two seasons with the Massachusetts Minutemen. 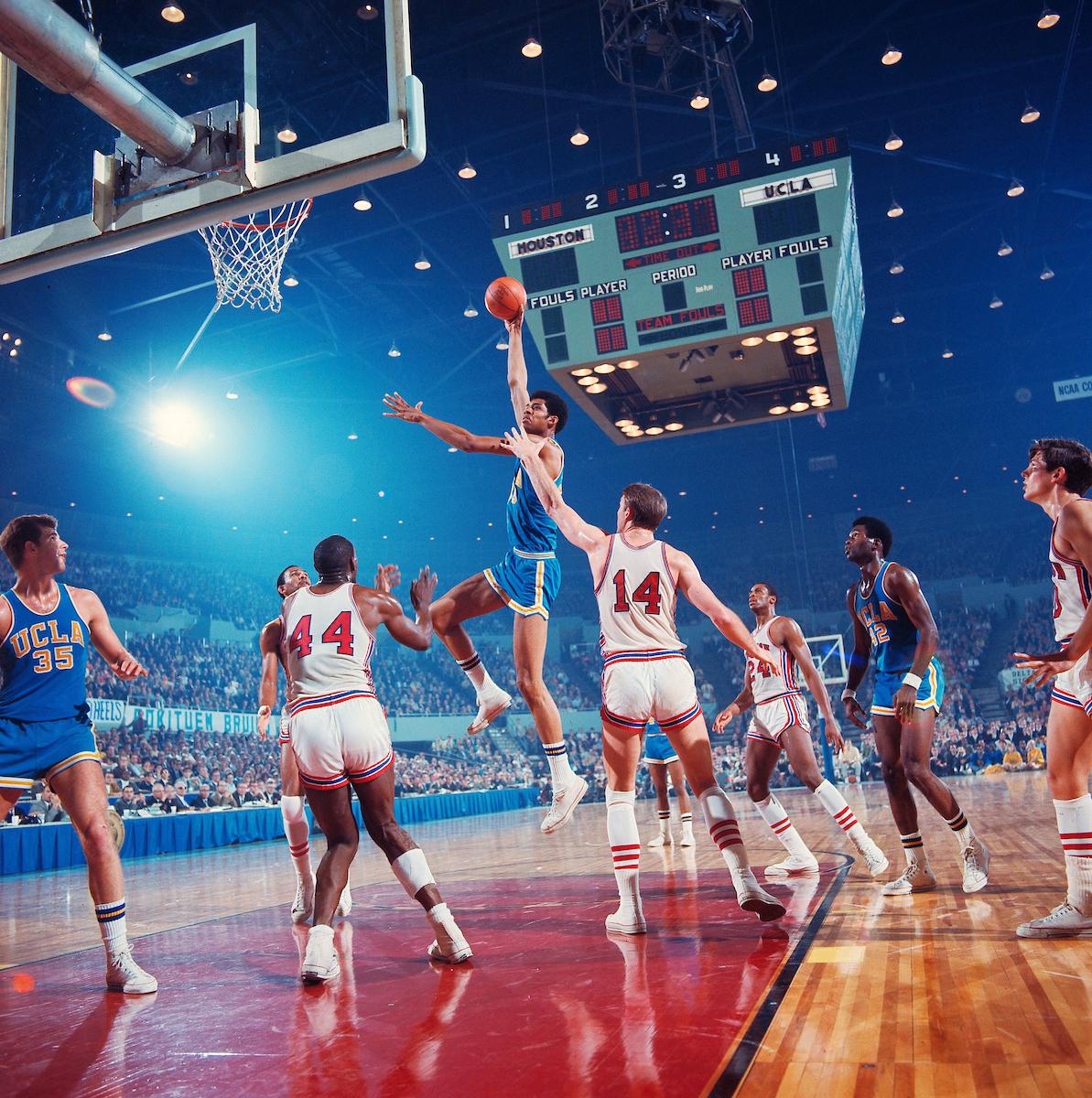 He won the NCAA Championship in all three of his seasons with the Bruins varsity squad. The Milwaukee Bucks drafted him first overall in 1969. 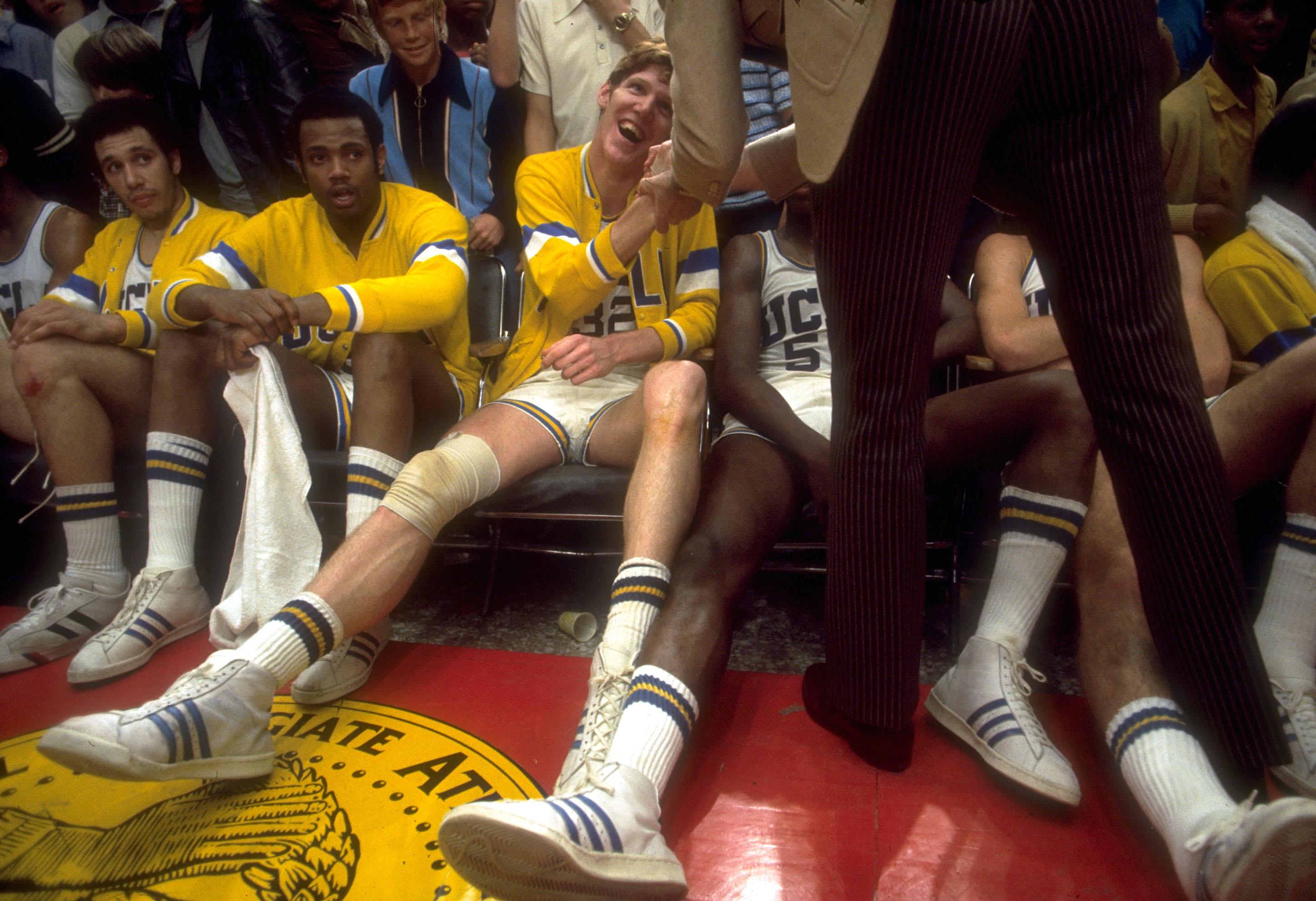 Walton had one of the all-time best individual performances with UCLA in the 1973 championship game. He scored 44 points and hit 21-of-22 shots in winning the title over Memphis State.

Coached by  John Wooden from 1971 to 1974, the center averages 20.3 points and 15.7 rebounds per game. Walton and UCLA set an NCAA men’s basketball record with 88 straight wins. He finished as a three-time first-team All-American and Naismith Award winner from 1972 to 1974.

PLAYERS TO WATCH: These 5 AAC players will make a difference next year

Walton was picked first overall by Portland in 1974. 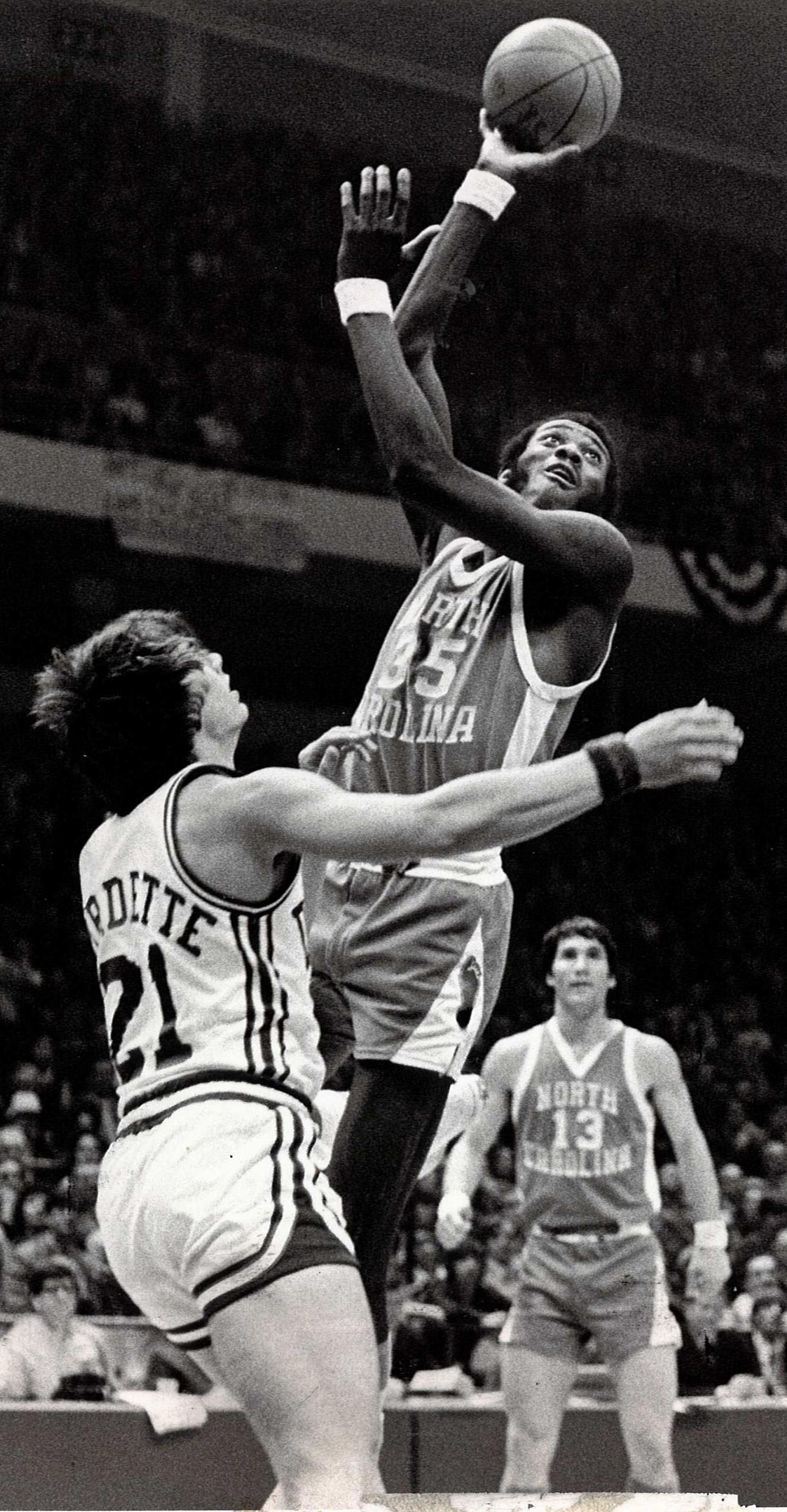 McAdoo played one season at North Carolina after two seasons at Vincennes University, a junior college in Indiana. He made his presence known in a short stint with the Tarheels, scoring 19.5 points and grabbing 10.1 rebounds per game throughout the 1971-72 campaign.

McAdoo was the second-overall pick of the 1972 NBA Draft, landing with the Buffalo Braves. Cowens’ legacy lives on at Florida State, where he holds the all-time rebounding record with 1,340 boards in three seasons (1967-70). In 78 games, the center averaged 19 points and 17.2 rebounds per game. Cowens went fourth overall to the Boston Celtics in the 1970 Draft. 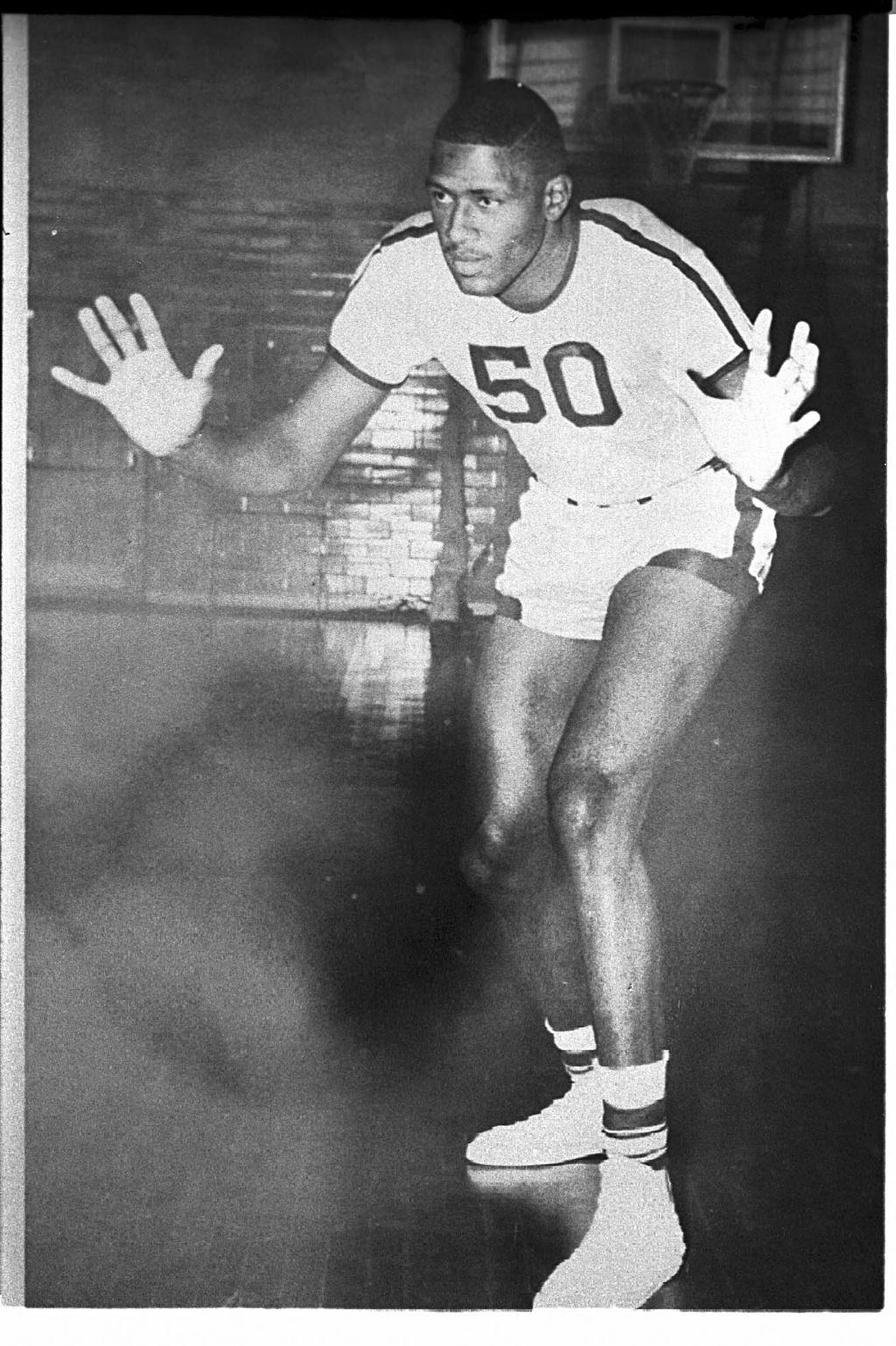 The 6-foot-9 Reed guided the Tigers to an NAIA title, stacking up the credentials to become a second-round pick to the New York Knicks in 1964.

With a per-game average of 20.6 points and 18.9 rebounds from 1965 to 1968, the center earned two first-team All-American bids and was drafted at the second overall pick to the Baltimore Bullets in 1968. 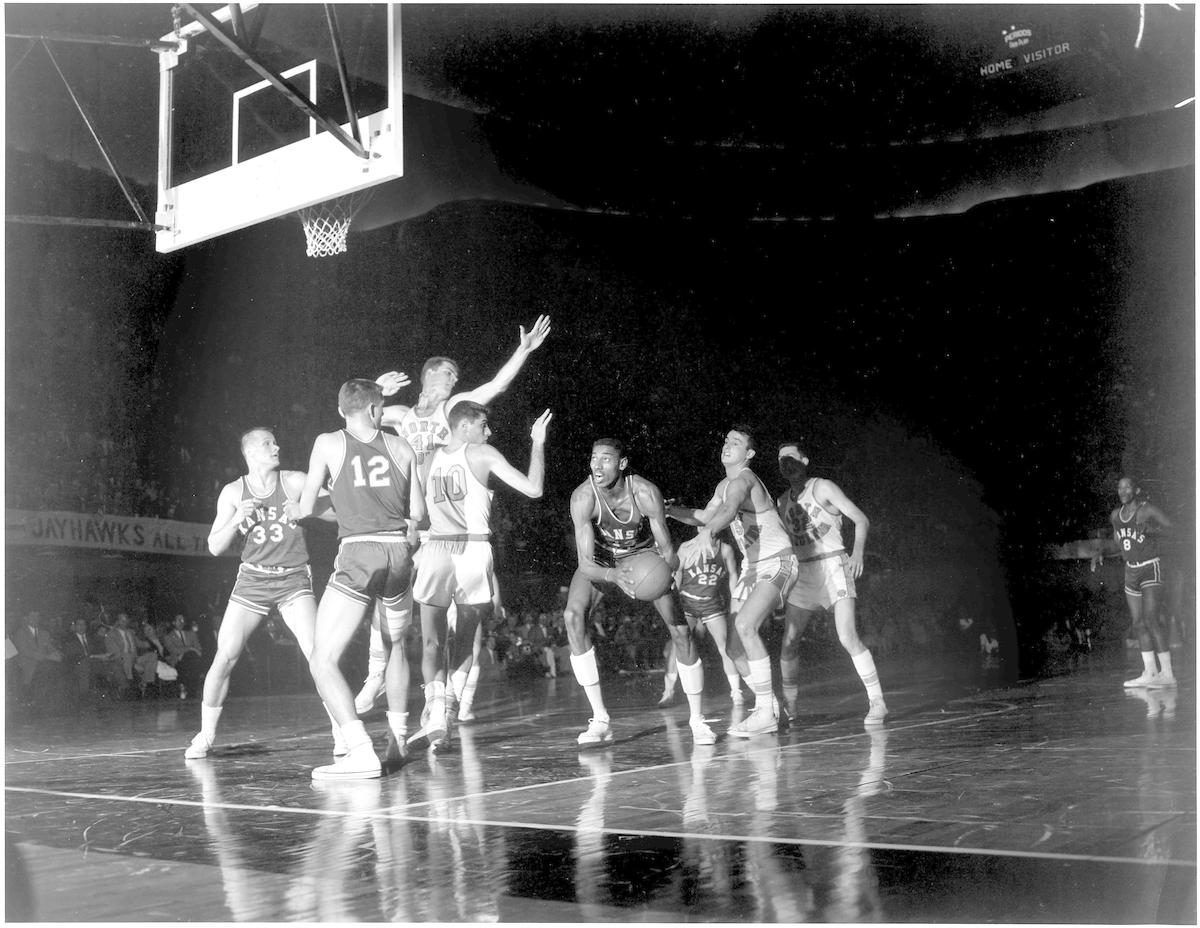 “Wilt the Stilt” was triple-teamed on occasion during his two varsity seasons with the Jayhawks — and it was for good reason. The 7-foot-1, 275-pound powerhouse tallied a career 29.9 points and 18.3 rebounds per game from 1956 to 1958. 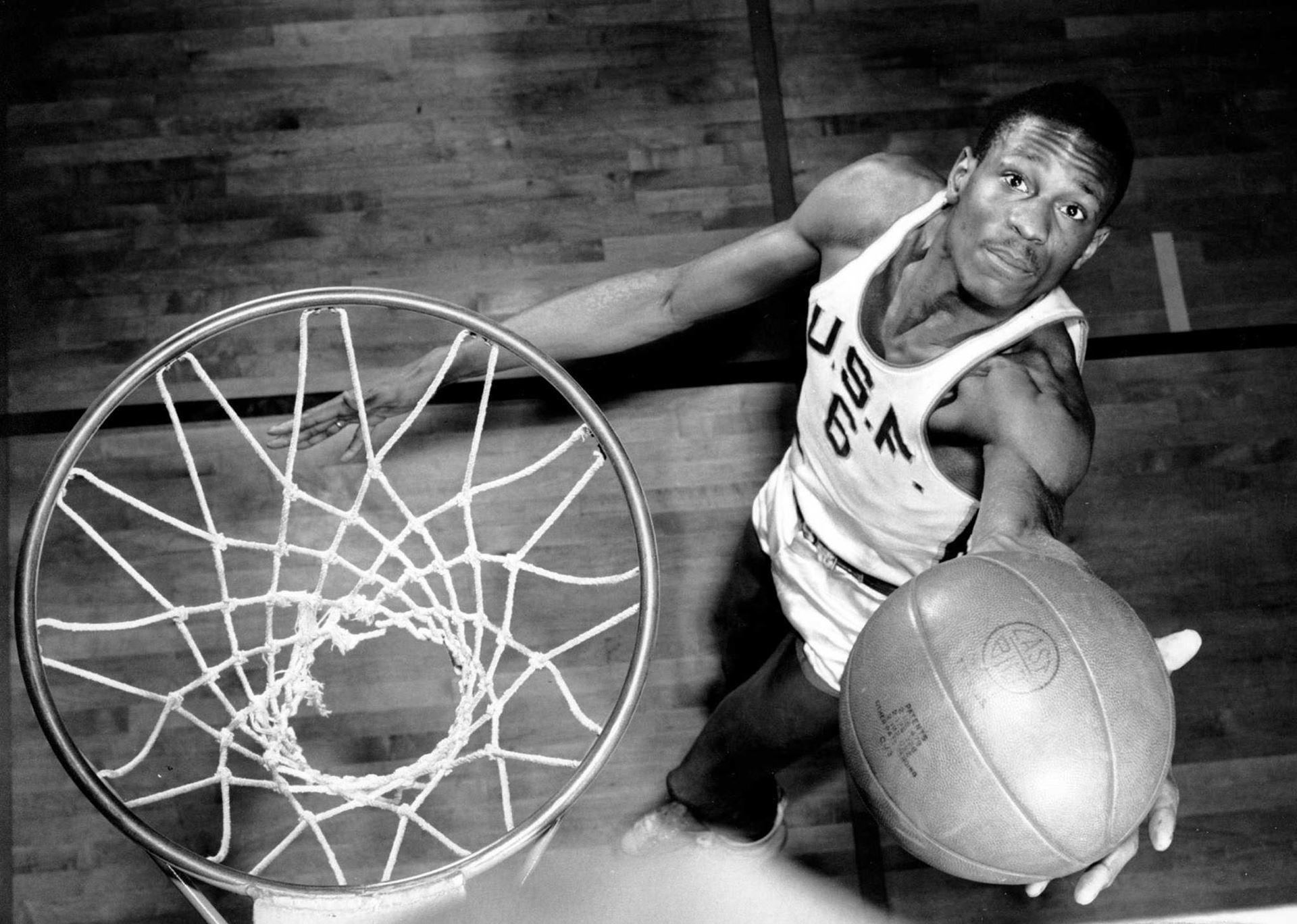 Russell’s teams won 55 consecutive games and added two NCAA championships. He averaged a double-double with 20.7 points and 20.3 rebounds per game in his three years from 1953 to 1956. 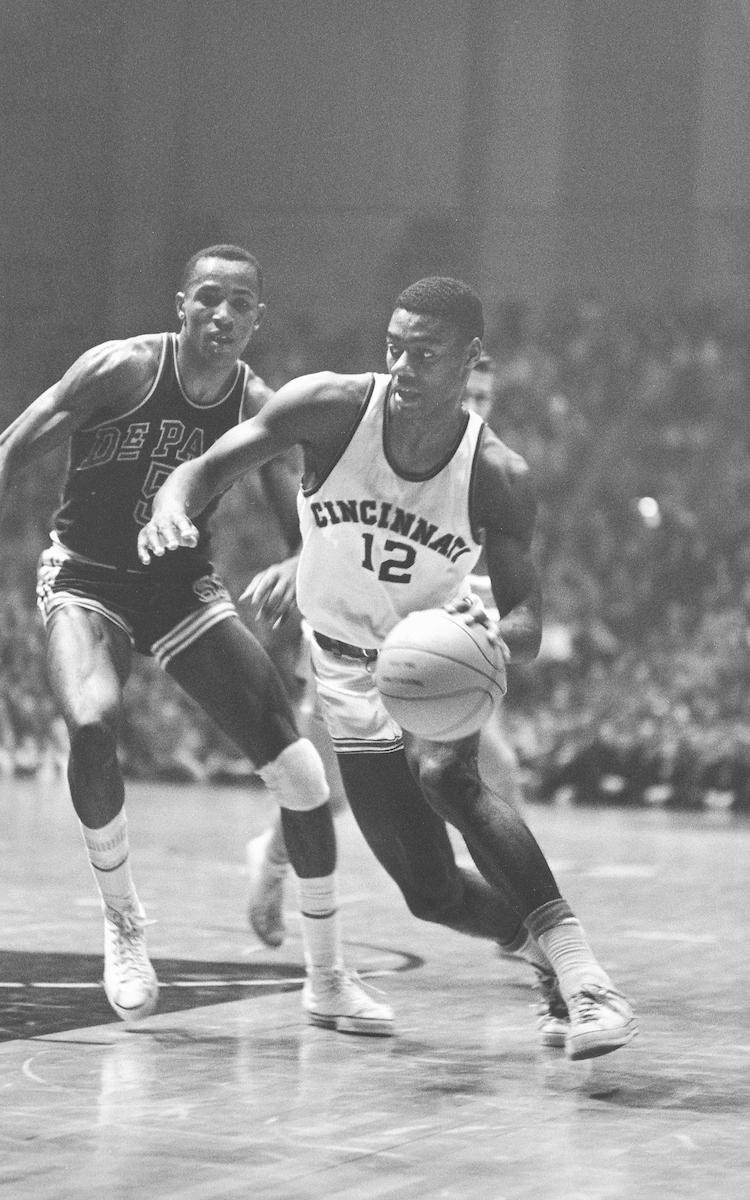 Robertson was a monster with the Bearcats, averaging a whopping 33.8 points, the third most in collegiate history, and 15.2 rebounds per game in 88 contests with Cincinnati.

The guard held the national scoring title, joined the All-American first-team and won College Player of the Year in each of his three seasons.

“The Big O” was drafted by the Cincinnati Royals in 1960. 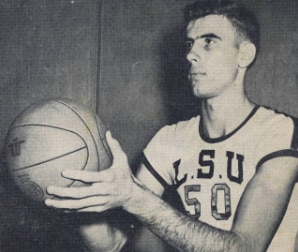 Pettit played three varsity seasons at LSU from 1951 to 1954. The forward averaged 27.4 points and 14.4 rebounds per game for the Tigers and was a first-team All-American in 1954 — he also led the team to its first Final Four.

Pettit was the second overall pick by the Milwaukee Hawks in 1954. 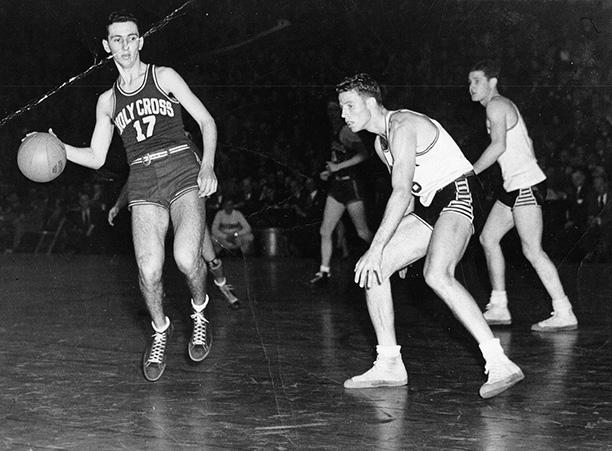 Cousy averaged 15.2 points per game in four seasons at Holy Cross from 1946 to 1950. Properly nicknamed “Houdini of the Hardwood,” Cousy was known for his revolutionary playmaking skills and his flashy passing. He was selected third overall by the Tri-Cities Blackhawks in 1950.