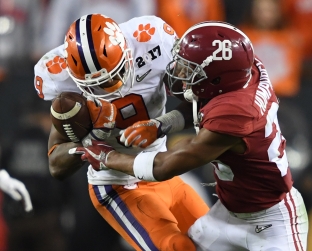 Where did previous College Football Playoff finalists start their season in the AP poll?

This past year’s FBS national championship game matchup wasn’t a surprise — at least not to members of the media. Alabama and Clemson came into the year at No. 1 and 2, respectively, in the preseason AP Top 25 poll.

But do preseason rankings matter when it comes to which programs were selected to the four-team College Football Playoff?

The short answer is — in a limited sample size — no. Since the CFP was introduced in 2014, six of the 12 Playoff participants started the season ranked outside the top four. Three of those six didn’t even crack the top 10.

This past year’s classic between the national champion Tigers and the Crimson Tide marked the first time in the Playoff’s three-year history that either of the top two preseason selections advanced to the title game. The No. 1 preseason favorite is 1-2 in CFP play with zero national titles.

Here’s a deeper look at all 12 programs who have participated in the CFP and how they stacked up in the preseason:

This past year’s Playoff was a happy medium in between the expected and unexpected. After Alabama defeated Clemson in the 2015 title game, both entered 2016 with similar title expectations and lived up to the hype.

However, the No. 3 and 4 preseason teams (Oklahoma and Florida State) were both hurt by early-season losses that kept them out of the final four, despite strong finishes to their seasons.

The second year of the CFP system brought the most parity. Two teams ranked in the teens during the preseason got the nod while the top two preseason picks were left out for the only time in the Playoff’s three years.

At No. 19, Oklahoma had the lowest preseason rank of any of the 12 Playoff participants to date. At No. 12, Clemson was the lowest-ranked preseason pick to advance to the title game.

The very first Playoff was most in line with the media’s preseason picks, as three of the top four made the field. The lone outlier, preseason No. 5 Ohio State, got the final spot in the bracket over Big 12 contenders Baylor and TCU. Preseason No. 4 pick Oklahoma (8-5) did not crack the CFP top 25 rankings.

Even with the lack of unexpected participants, the CFP still provided some intrigue with the No. 4 seed Buckeyes defeating No. 1 seed Alabama in the semifinals and then No. 2 seed Oregon in the national championship game.

In three seasons under the CFP format, there have been mixed results when it comes to the correlation between preseason and postseason rankings. So what will Year 4 look like? Fans will get their first glimpse in one month.