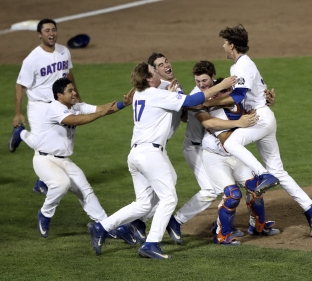 When is the 2018 College World Series?

The 2017 College World Series marked the fifth straight year that a program won its first-ever national title. In an all-SEC showdown between Florida and LSU, the Gators came away with a two-game sweep to close out a 52-19 season.

So when does the 2018 tournament start? It’s never too early to ask.

The 2018 College World Series will be played from June 17-26/27 at TD Ameritrade Park in Omaha, Nebraska. The opening ceremonies kick off the night before on June 16. As always, two double elimination brackets will determine which two teams will meet up in the best-of-three finals from June 25-26/27.

Stay tuned for the announcements on the beginning of the 2018 regular season in February and the start of the NCAA tournament in late May/early June.

Purchase your tickets and plan all your future trips to Omaha now using this link.