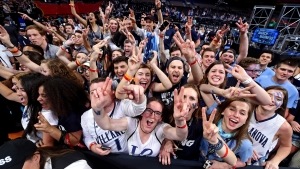 When does the men's college basketball season start?


The 2018 college basketball season ended with Villanova winning its second title in three years, outlasting Michigan 79-62 behind the efforts NCAA Most Outstanding Player Donte DiVincenzo who scored 31 points. With just 49 days until the start of the 2018-2019 season, we can already start thinking about who will be the next champion.

The first games of the season start on November 6. And there are plenty of early-season tournaments kicking off in November. Check out some of those brackets here.

MORE: Start to ’18-19 moved up, should provide ‘more compelling’ openers

The first day of match-ups features a local game between Towson and Virginia, who will be playing in its first game back since the Cavaliers early-exit in March. UMBC, who beat Virginia as a 16-seed in last year’s tournament will face Marquette to open the season. Some other highly anticipated games to look out for are Duke versus Kentucky and Kansas against Michigan State.

Mark your calendars! Basketball starts even earlier next season! pic.twitter.com/DAwkIgo8xw

Here are some matchups that will take place on the first day of the season: