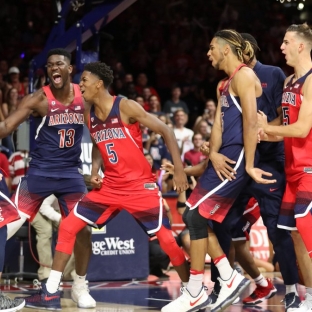 What would happen if each of the preseason Top 25 wins the national championship?

Out there in the haze of April sits the national championship trophy. Back here in early November, the contenders are lining up to start down the road that leads there.

Time to take out the Associated Press college basketball Top 25, and do a little imagining of what if.

What if No. 1 Duke ends up with that trophy?

At 71, Mike Krzyzewski would out-age Jim Calhoun as the oldest championship coach in history. It would also be his sixth, meaning he would own as many as North Carolina’s entire history.  And this would be his 13th Final Four, passing John Wooden. It’s an awe-inspiring moment for a coach to pass John Wooden in anything.

What if it’s No. 2 Michigan State?

The Big Ten can have a league-wide high-five and celebrate not having to answer one question anymore. Why has it been 18 years since this conference team won a national championship?

The West gets its first champion since the last time Arizona did it, and that wasn’t even in this century. Try 1997. And Sean Miller goes off the list of most accomplished coaches without a title.

That would put 2018 with 2008 and 1988 as Kansas title years, making the Jayhawks an early favorite for 2028. Also, it’d be the first championship to go outside the Eastern time zone since…Kansas in 2008. And it would prove the theory that Bill Self has to win a second title sooner or later, right?

Speaking of high-profile guys still seeking a second ring, this would take care of John Calipari, and make one-and-done No. 1 again. It’d also be the ninth trophy for the Wildcats, so they’d be even larger in UCLA’s rearview mirror. The Bruins have 11. Plus, there’s a really good chance the Final Four Most Outstanding Player award would go to a freshman.

Jay Wright would become the 15th coach with multiple titles. And perhaps the best dressed one. Suddenly, Villanova would have as many championships as Kansas.

MORE: Which preseason All-America could win Player of the Year?

A breakthrough for the mid-majors, even if Wichita State might not really be one. Gregg Marshall’s cellphone could start ringing with job offers from big fish before “One Shining Moment,” is finished.

. @GoShockersMBB IS BACK. YOU READY?

That’d be three in the past 13 years for the Gators, or two more this century than Kentucky. So who’d be king of the SEC mountain?

The Tar Heels would join the short list of repeaters. Only seven schools have done it, and only Duke and Florida in the past 44 years. And with four titles, Roy Williams would be only one behind his neighbor, Mike Krzyzewski.

MORE: What March Madness could look like if the preseason polls are correct

The Trojans – who have national championship trophies in the display case by the dozens from other sports – finally would add men’s basketball. They’d have to get to their first Final Four since 1954 to do it.

Bob Huggins started the season with 819 career wins, making him the leader among active Division I coaches without a national championship. But not anymore.

RELATED: ‘Press Virginia’ may not get used all the time

Sixty years after Oscar Robertson’s first varsity season with the Bearcats, they’d have the title after not playing one home game in their own state. Their arena is closed for renovation, and all home dates are across the Ohio River at Northern Kentucky.

Besides becoming the sixth current ACC school with a championship, the Hurricanes also would be the most southern school ever to win one. Jim Larranaga, who once gave the world George Mason in the Final Four, would be the second oldest championship coach ever at 68.

Hard to imagine this would be only the second Final Four in history for the Irish. But Mike Brey has come awfully close.

Richard Pitino would join his father as a national championship coach. No other son in history can say he did that.

Nobody – nobody – would have imagined this back amid the wreckage of the fall.

Chris Mack will have coached his alma mater not only to its long-awaited Final Four, but right on to the net-cutting ceremony. And it’d be worth noting the national champion has graduated its last 105 seniors.

Mark Few’s coaching journey – between staying put to fish in the Northwest and winning a championship with Gonzaga —would become among the most remarkable in college basketball history. If it isn’t already.

And they thought the celebration was big in 2017 when the Wildcats finally got invited to the NCAA Tournament.

Thirty-eight years. That’s how long it has been since John Wooden’s alma mater had gotten to the Final Four. Oh, how Gene Keady tried.

Bob Knight and Dean Smith are the only two men who both played for and coached a national champion. Steve Alford would become the third. Presumably, LaVar Ball would not be first up the ladder to cut the nets.

First, more people would actually know where the place is. (Hint: To get to Moraga, California, you go to Oakland and turn right). Second, they’d be the first champion ever nicknamed the Gaels. Third, it’d be the biggest Cinderella championship story since, what, UTEP in 1966, or Loyola in 1963? Or ever?

Fun fact: The 1989 Seton Hall team remains the last one-point loser in a national championship game. A good many Pirate faithful still don’t think Michigan’s Rumeal Robinson was fouled in the last seconds, sending him to the line to beat them. This would ease the pain.

Finally, a national champion from the Big 12 (or Big Eight, or Big Seven) not named Kansas. It will have taken 80 NCAA Tournaments for that to happen.

RELATED: Breaking down the power conferences by height and weight

The Aggies would be the first team to win the championship in its Final Four debut since Connecticut in 1999. The last time before that was UTEP in 1966.

P.S. At least 24 of the above are never going to happen.