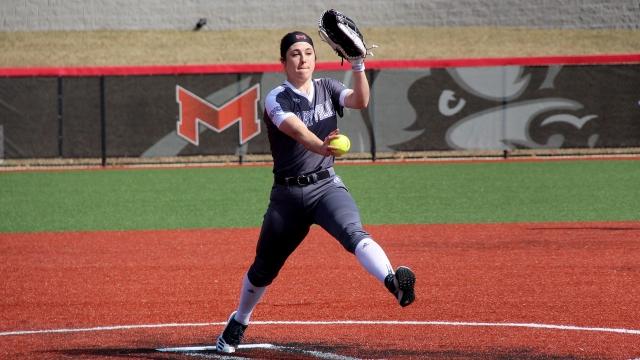 What it took for Alyssa Callans to throw back-to-back no hitters, and what comes next

When Alyssa Callans learned she was eligible to return for the 2021 DII softball season, she needed just one day to make her decision.

Nearly a year later, the Maryville (MO) pitcher had another eventful 24-hour span. Callans threw two no-hitters (one of which was a perfect game) in as many days earlier this month.

The first came in the Saints’ 2-0 win over Wisconsin-Parkside on March 6. She finished with 10 strikeouts and only walked three batters. It was also the first time she’d ever thrown a no-hitter.

Callans would soon outdo herself. The righty pitched a perfect game in a 5-0 victory over those very same Rangers on March 7. She struck out 14 batters and became the first player in Maryville (MO) history to throw multiple no-hitters.

“The whole weekend, I was kind of (in) go-mode,” Callans told NCAA.com in a Zoom interview. “It wasn’t on my mind all that much, how I was performing. I was just doing my job, and when I got to the end I was like, ‘OK, game is over. But I guess I did something cool.'”

The prospect of a no-hitter may not have been on her radar, but head coach Courtney Conley was well aware of the situation.

“With Alyssa, when she’s performing like that, I don’t mess with her,” Conley said. “I don’t want to say something that’s going to make her think too much about it.”

Eventually, though, there were rumblings in the dugout.

“It was definitely brought to my attention,” Callans said. “But I really tried to put it out of my mind and just keep doing what I was doing.”

Her plan worked. After walking the leadoff hitter in the top of the fifth inning, she retired the final nine batters.

Callans had little time to digest her accomplishment. She was back on the mound the next day.

“Right when I got to the field, I wanted Alyssa to pitch this game,” Conley said. “And I went up to her and said, ‘Hey, how do you feel?’ I was expecting her to be like, ‘Yeah I’m a little sore, just pitched a no-hitter yesterday.'”

That wasn’t the case. Instead, Callans told her coach that she was “good.” But Conley wanted to know if her ace felt 100 percent.

“Right when she said, ‘Yeah I do,’ I knew she was going to have another lights-out game,” Conley said.

Still, the third-year head coach didn’t anticipate what happened next. By the time the fifth inning came around, Conley’s palms were sweating. She knew her pitcher was once again approaching something special.

“I just kept it really simple,” Callans said. “If I throw the pitches where I’m supposed to throw them, then I’m doing my job. And so, that’s what I really just tried to focus on.”

It’s a job that the Illinois native has mastered. Since arriving on campus in 2017, Callans had a 46-24 record with 436 total strikeouts and was 4-1 this season with a 0.20 ERA as of this writing. Now she has a no-hitter and a perfect game on her resume.

“I think that is just incredible,” Conley said. “It was a little bit of a different feeling this game, because she did just throw a no-hitter. And so, back-to-back is a feat — I have goosebumps thinking about it right now.”

SB – Alyssa Callans throws a perfect game with 14 strikeouts to lead the Saints to a 5-0 win over Parkside. That is back-to-back no-hitters for Callans!! #GLVCsb pic.twitter.com/VnrjIBr9uf

It was around a year ago when Callans wondered if she had played her last game. The COVID-19 pandemic prematurely ended the 2020 season, and there was no telling what 2021 would look like.

“I still had more to give,” Callans said. “It would’ve been really tough not to be able to come back and feel like I left it all on the field.”

After the NCAA granted seniors another year of eligibility, Conley reached out to her star pitcher.

“Getting Alyssa back meant everything,” Conley said. “When I asked her to come back, I said, ‘You know, you don’t have to play (in the) preseason. You can pick up right where you left off and just start at conference (play) in March.”

“She came back 24 hours later and said, ‘I’m all in coach. I’m going to be at every game, every practice. I’ll do whatever you need me to do.’ That’s really the type of player she is, but it’s also the type of person she is.”

Conley credits Callans’ success, both on and off the field, to her work ethic. The coach has never seen anything like it in her career.

“I’ve seen people that are maybe more naturally talented or taller, and everything like that. But nobody works like Alyssa.”

That’s high praise from Conley, who was a four-year starter at third base for Alabama. She won a national championship with the Crimson Tide in 2012.

The respect is mutual. Part of Callans’ decision to return was based on Conley and assistant coach Emily Crane’s ability to create a strong team culture.

“I’m just very grateful to not only play softball, but to play with this team especially,” Callans said.

The Saints rightfully celebrated her historic series against Wisconsin-Parkside. But make no mistake, they know that it’s time to turn the page.

“We have to do next-pitch mentality, which Alyssa did through the whole perfect game and the whole no-hitter,” Conley said. “She wasn’t looking back at her last ball, she had to focus on the next pitch ahead.”